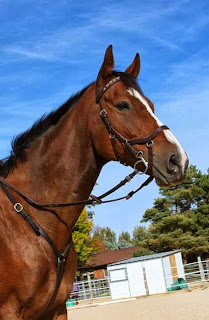 I'm sure most of you have noticed that Courage is sporting his very own Micklem Competition Bridle in havana. I was torn between it and a fancy figure eight, but I ran across this one in his size and my color on facebook, so it came home.


I was interested in the Micklem design for several reasons. I like the idea behind it, of fitting a bridle to the horse's face. I like the mechanics of it--it does make more sense biomechanically than a traditional plain cavesson bridle. I've also seen them popping up around the sport horse world more and more frequently. Sure, it could be a trend, but there was one easy way to find out if Courage wanted to get in on the trend.


Up until this point, Courage had gone in a couple of Cuna's bridles. None of them fit him well. He probably went best in the figure eight, but it fit him most poorly. He spent most of his time in the crank/flash on Cuna's dressage bridle.


When the Micklem arrived, I looked it over thoroughly. Despite being used, it was in excellent condition. The rings that hold the jaw strap and the nose strap on are sewn in to the bridle with nylon, which makes them much more durable. The leather quality is ok. It's sturdy and workmanlike, certainly not the dreamy luxury of an Antares (swoon!!), but it isn't nasty and plastic. I'm actually quite curious to see how it does with regular care--it's a little dry right now.

As for sizing... well, if you've ever looked these up on the internet, you quickly realized that the sizing information available was pathetic and useless. Here's what I can tell you.

The people on the internet are correct--there's really no way you can measure this bridle that compare to a normal bridle. The browband? Given that those are changeable, not a super useful number.

That said, my mare wore a full size bridle and could sneak into an oversize. She wore the horse sized Micklem in newmarket with no trouble at all.

Courage, who is too small for Cuna's horse sized bridles, fits perfectly into the cob size.

That said, if you are in doubt, GO UP A SIZE. Seriously. Courage has the tiniest, narrowest, daintiest little face, and the nose strap is on the second hole. We tried this bridle on a 15.1h TrakehnerX, and it wouldn't buckle.

A note on the bit clips: I had these for Izzy's model. They were completely useless. I mean, maybe if your horse just happened to be the perfect size and you just liked how plastic looked on their face, maybe they would work. For the rest of us, if you want the bit more stable, use a full cheek or baucher.

The Micklem in Use 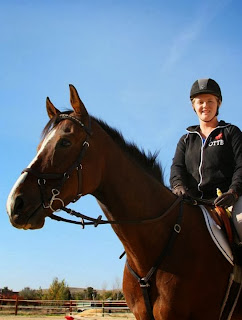 Now the important part: does it work?

That depends on what you mean. It absolutely functions as a set of leather straps that hold the bit on my horse and facilitate riding, but I doubt that's what anyone is asking.

Courage has been mouthy/busy, particularly when he was bored, stressed, or distracted. He went in a big shadow roll with his mouth tied shut on the track for a reason. That said, he wasn't presenting with any extreme/unexpected problems. He wasn't a compulsive head-rubber, he didn't seem agitated after rides, nothing like that.

I knew when I put it on him that it wasn't magical--he wasn't going to learn to go into the contact and carry himself just because he was wearing a new bridle.

I think it works for him. He is noticeably quieter with his mouth and happier in his work than he was in a normal bridle. He doesn't fight me as much about taking contact and he doesn't crank his mouth open and lean on me. He still has other evasions. He twists his head and giraffes around and does normal green horse things.

Honestly, I wasn't expecting the Micklem bridle to make any difference whatsoever, but he's definitely liking it and going better than he was before.

If your horse is happy in a normal bridle, there's no reason to switch over. As I mentioned, I had one of these for my mare and it didn't make one iota of difference in the way she went.

If you don't like how it looks... well, it's not for everyone. It's definitely distinctive and it doesn't work on many faces. Courage has a long, narrow face that does well with some business filling up space. Cuna would look downright silly with this much "stuff" going on.

It's not the magic bullet, but it works for us.

So... the tack 'ho at rest? I guess I don't get to keep hunting for my Antares after all. Courage is a Micklem Man.

Posted by SprinklerBandit at 6:44 AM