Lauren is a fantastic human and blogger who wrote the Plaid Horse post, "Horses Can't Be Our Only Therapy". It's good. You should read it.

I wanted to append her thoughts just a little bit because they're a topic that strikes very close to home for me.

I loathe the "horses are my therapy" sentiment.

Loathe.
Horses are amazing. Many things to many people. I've invested years of my life into them and I will 100% tell you they (and the people I met through them) shaped me into the person I am today and I will forever be grateful for that.
However.

I'm going to be very personal for a minute and tell you I was raised in a shitty environment where there were a lot of unhealthy expectations and that I was never allowed to think for myself or have an emotion or respond to anything and as a very young human, I learned to choke everything down. By the time I turned 18, I literally didn't have emotional responses to anything. Ever. If that sounds weird AF, it fucking is.
You know why I kept that fucking hellmare for so long?

Because I literally didn't know how to feel fear. Couldn't process it. Didn't have a space in my head for it.

It took three deeply unhealthy years of me trying everything and doing everything and being unable to process a goddamn basic concept like fear before I was able to be like "ho shit the reason my stomach feels weird every time I go to get on this animal is an emotion called FEAR and that is a normal and rational response to being wildly overhorsed and hey, it's an important red flag that your brain is trying to keep you from actually dying".
If that sounds weird AF, it fucking is.

And if you think it might have been smarter/safer/cheaper to address all that in the confines of a therapist's office, you're probably right. If you think it was unfair to drag a horse along with me through that particular puddle of shit, you're also right.
I'd like to say the story has a happy ending there, right? I learned that fear is a thing and that life is better without fear and that fear means you might actually die and you should pay attention when you feel fear. And then I met Cuna. And everything was great.

From him, I learned another super-elementary concept: love. For the first time in my life, there was someone I couldn't wait to see. Wanted to be with all the time. This connection that no one else got but it was just the two of us against the world and I never cared that he was this goofy old red horse and he never cared that I was this weirdly damaged oddball who desperately tried to look normal.
As you all know, the next step after that was learning to lose him.

And then Courage, with every cheesy implication you can think of. I think the most important thing I learned from him was that no matter how far down I thought I'd stuffed my emotions and how hidden every response was, I still had to acknowledge them. They still mattered.

It didn't matter one iota if no other human on the face of the planet knew I was a fucking wreck who was going through hell.

He called me on it.

It was zero fun. Do not recommend.

If that sounds weird AF, it fucking is.

Because see. I vividly remember showing up to ride because y'know horses are therapy or whatever bullshit. The moment I stepped out of the car, he knew what was up.

I literally couldn't catch him in his stall.

Standing there. Crying. Because the one thing that was supposed to be "my therapy", the "fun thing" in my life, was no fun at all.

I learned a lot. I learned that I have emotions. That those emotions matter. That sensitive creatures can call us out on those emotions even when humans can't or won't or don't care.

But you know what else I learned?
Horses have emotions too. They respond to us on a very innate level. It is completely and totally unfair to them to show up and dump our stress and our shit and our negativity into their otherwise placid lives and then blame them for their responses. We are responsible for their well-being, not the other way around.

If I can't meet my horse in a calm, understanding frame of mind and be in that moment with them, I need to not be there.
I cringe when I watch people take their shit out on their horses and their dogs and their kids. It bothers me on a very visceral level when I hear people assign intention to an action by an animal. The horse isn't being a jerk. He doesn't care one way or another about your right leg or your left rein or the jump in front of him or whatever stupid bullshit you're blaming him for.

All the horse is doing is responding to what you don't even know you brought with you.
Some are like Zoe and they're golden through and through and will tolerate a lot more. Some are like Courage and won't.

It doesn't matter though.

It's still our responsibility to be better than that.

We owe it to them.
I spend less time with Zoe on a weekly basis than any other horse I've had.

Every time I'm with her, I am able to breathe in and breathe out and be part of that moment.

Not dragging my shit behind me.

Not blaming her for what I brought with me.

Not taking out on her things she has nothing to do with.

We're stronger for it. Time spent together, no matter what we're doing, is positive for both of us.
Posted by SprinklerBandit at 10:15 AM 32 comments: 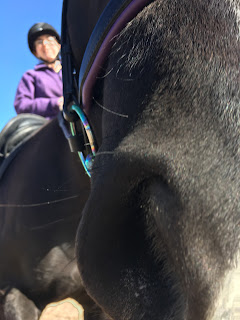 The footing wasn't good enough to canter or jump or anything so we called it and petted her smooshy nose and fed cookies and let her eat the tasty spring grass.
Posted by SprinklerBandit at 12:13 PM 11 comments:

I've been at odds with this whole "amateur equestrian" thing lately. It sounds dumb, but I don't understand how to relax and enjoy the process and not be competitive, if that makes any sense. 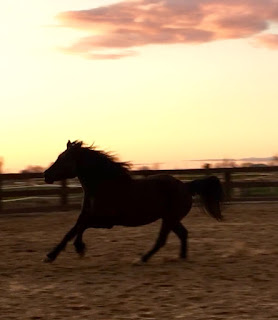 I mean, it's obviously easy in the sense of "just don't sign up for shit" and I have that part dialed.

I'm a super motivated and goal-oriented person. To a fault. (Example: took up throwing frisbees last year. Now a frisbee-throwing champion with multiple trophies to prove it.) I recognize that this is a character weakness as much as a strength. I mean, again, here I have this amazing horse and sure I didn't have the energy to do anything about that for a while, but I kind of do now.
It's just that every time I tried to ride her, I struggle-bused real hard. Riding is hard. Dressage is hard. Practice is critical. Lessons are expensive. I'm too focused on perfection and too aware of my own deep-seated flaws to really enjoy half-assing it on that level. It's not fun for me to do badly, know I'm doing badly, and then continue to do badly.
Deep breath. This is not an anxiety spiral.

The other day, I dug a jump saddle out of my garage, put together the one brown bridle I own that I can sort-of coax on to ZB's head, and then trooped out to the barn.
I set up a bitty little trot pole and made myself do goofy jumper-lesson patterns around the ring. Pick up a contact. Trot at the corner. Halt at A. Trot off. Straight line over the pole. Walk at the letter. Halt. Walk off. Just whatever, keep things organized. 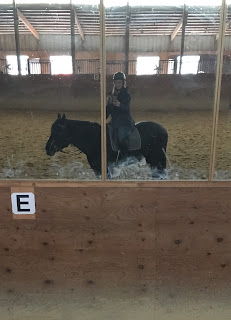 It was actually really funny. As we both settled into the exercise (and I committed to keeping my hands UP and FORWARD like a JUMPER and FOR THE LOVE OF GOD NOT FUSSING AT HER) (god I teach good lessons to myself in my head), ZB relaxed into the contact and gave me some really quality work.

For the first time in a long time, I got off from a ride with a saddle and felt... successful? Motivated, even. I want to do it again and do it better and I actually feel like it was productive for both of us.
Naturally, I prompted celebrated this success by ordering a browband.

Stay tuned, I guess.
Posted by SprinklerBandit at 2:31 PM 14 comments: