I was bragging the other day about how I'd been so good about not buying tack lately, and then I realized I bought dressage boots, two pairs of breeches, fancy bath products, a girth, and even bandage liners. But really. Not that many things. And some of those things were needed! The breeches were $15/each and winter weight, the bath products were because our climate requires specific care, the girth was because SOMEONE decided leather is now a no-go and the bandage liners were to hit a minimum purchase and get a discount+free shipping. Plus they're a brand I don't have and I can do a review later maybe. 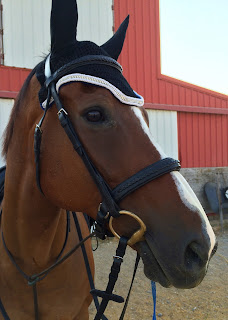 My real obsession is bridles though and I haven't bought a bridle.... I dunno. In a long time. Bought some pieces this spring, but I think my last whole bridle was like.... 2015?? Picture of moderation here.

Anyways I dragged Lindsey over to the local consignment place, but the owner was out and she'd just gotten back from a show. So because we are grown adults who are good at patience, we let ourselves in and dug through boxes and rearranged things. I managed to talk myself out of a nice cob-size hunter bridle given that C is not and will not become a hunter.

But then we found it.
See, if you're a dressage tack nerd at all (cough), you'll know that Otto Schumacher is freaking hot right now. You'll also know that those bridles run $500-800 before customization and that they are the cutting edge of white padding and patent and custom colors and all that stuff. Also if you know all those things, you'll know that this is a super-retro traditional-crown model that probably stepped off the shelf what in the 90s? At the latest? 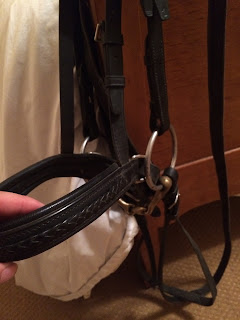 And I wanted it.

I made grabby hands, put it down, walked away, came back, took measurements, walked away, and hoped I'd forget about it when the consignment store owner was like "lulz just take it on trial", WHICH I DID.

I really, really wanted to hate it because there are definitely other things to spend money on. But. I had to try it on, right? THERE WAS NO OTHER OPTION.
It's a unique look for sure--I actually didn't know Otto made this model. I've seen a couple old-school stubbens that had the braid on the nose and brow, but they did brown braid, which did nothing for me. This is solid black and a little bolder than the stubben look. Also Otto.

I feel super hipster-y and weird saying this, but I kind of love it. Love how it smells, love how it feels in my hands, love how it looks on my horse. It's different without being too different. It's fun without distracting from him. 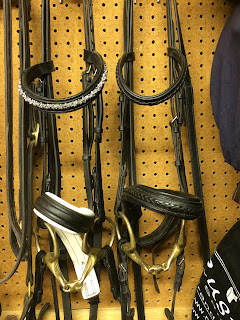 Side by side with my fancy white-padded bridle, you can see that it's actually very similar in terms of strap width and structure. Courage has a very specific face and lots of things look stupid on him. This bridle works.

It's not like anything I've ever had before. I don't know if it's retro enough to be cool right now anyways, but I enjoy the look and it's fun to have Otto in the barn. 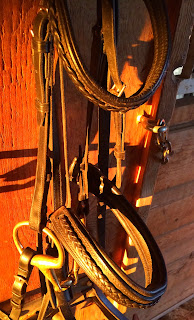 And in case you're wondering, my personal limit for bridles is 6 per horse and no, we aren't over the limit right now. We have Otto, the Red Barn, the Frankenbridle, the dressage Franken, and a western bridle which almost doesn't count. Plus a loaner drop bridle, which definitely doesn't count.

Welcome to the collection, Otto.
Posted by SprinklerBandit at 7:00 AM