One thing I'm being very conscious of with Courage right now is variety--if he has a solid dressage day, I try very hard not to repeat the same thing the next day. I also don't always feel like riding (or wearing pants), so we find stuff to mix it up with. Toodling. Spa day. Ground work. 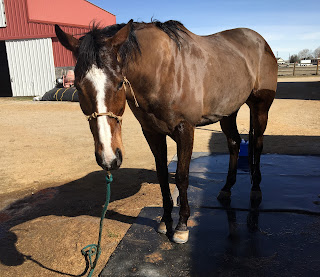 Courage is a horse that learns really well from the ground. Now that he's pretty comfortable going W/T/C/ plus halt and back off body cues in the halter, we're started adding a few things. One of them is ground poles--asking Courage to think and place each foot without anxiety or rushing. Some enterprising boarder has a mess of poles set up in the top of the outdoor, so once or twice a week I send Courage through them (from the ground, in a halter, at a walk) and if he calmly walks through, we just go on to something else. With a bit of creativity and a lot of walking, he's even gone successfully over raised cavaletti and started to be ok with it. 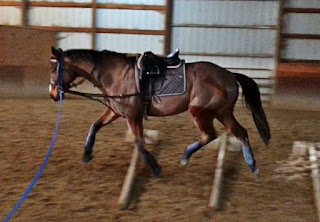 Another thing I've added is something Tik talked about when I audited his clinic--creating a vacuum in space essentially to "pull" Courage towards me. I can send him away just fine. Now I want him to come back.

Courage, with his typical "I'm-the-best-at-this-watch-me", has embraced the concept and it's completely adorable.


Oh, and the video shows something else we've added back in--jumping.

I'm really enjoying breaking everything down to it's littlest parts and attempting to rebuild it, piece by piece.

Poles caused anxiety and rushing, so we just occasionally throw them in until he understands the question and is comfortable. 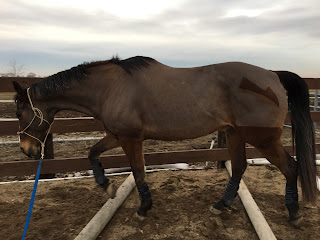 Now it's a jump. Because of the groundwork principles that are now in place, I can send him over the jump, and then take a break between each effort and have him come to me for scratches. The jump is a "trick", something he can show off and be the best at, without creating more anxiety.

Courage has always had a stylish, snappy front end, but then his back end. leaves a lot to be desired. It's not really conformational. I mean, it is in that he's short-backed and probably doesn't have the scope for HUGE spreads (think Grand Prix), but it shouldn't be an issue for him at the 3'-3'6"ish level.

I do think part of his problem was his inability to step up underneath himself at the canter and be adjustable, which we've been addressing both on the lunge and now under saddle. He's made HUGE strides.

So now we've fixed his canter, reduced his anxiety, and made jumping fun (on the line, from the ground).

But how do I show him how to use his back end? If this is going to pan out for him, he needs to not land on all four feet simultaneously, because that is no fun for anyone. 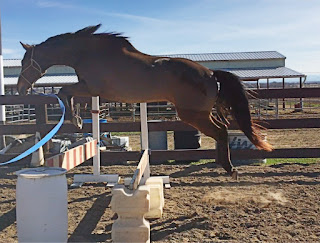 Lest it sound like we're drilling this--we're not. Once a week (or less), I throw him on the line in the halter and we just play a little. And again--Courage is a dressage horse now. I really don't think he wants to be a jumper, BUT this is another way to problem solve and address his back end without drilling dressage concepts over and over. Same principles, different medium.

And I think we've finally had a breakthrough.
Courage has always been a very careful jumper, so when he nailed this vertical with his front end, he jumped the hell out of it behind to stay clear. It's a good plan. It's very safe.

And it's the first time EVER I have seen him use his back end like a jumper instead of just sort of dragging it along awkwardly.

What's more, if you watch the video, you can see that while his next few attempts were awkward, he maintained some of that hind end motion.


(Notice: most of my jump media is off the left lead. That is mostly because I'm right handed and trying to lunge, video, keep the horse in the frame, and aim him at the jump with only two hands is wicked difficult.)

In case you're a video-hating curmudgeon (me), here's a still shot:

I'm fascinated. Utterly fascinated. Can I continue to teach Courage how to use his body in such a way that jumping under saddle is a potential future option that he would actually enjoy? I don't know. Maybe. The intellectual exercise alone is enough to keep me on track.

What is the compelling factor here? Was it hitting the jump? Is it jumping bare-legged? Is it a combination of learning to use his body and enjoy his job that's allowing him to work through more comfortable ways to do things? Is it just a one-off fluke? 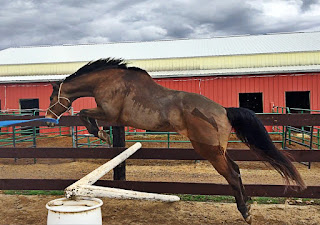 I mean, riding Courage over a jump is not on my immediate radar--some days I'm still not trotting and cantering is definitely a special occasion at this point. Courage seems pretty happy as a dressage horse and I don't think any of this will change that. 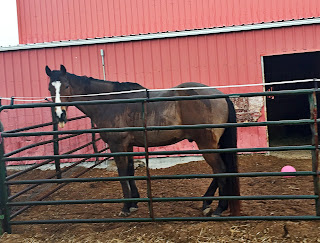 There is no wrong answer here-if Courage never jumps with a rider again, I'm no worse off. I don't have expectations or plans. I'm just enjoying the process of puzzling him out, and as long as we're both having fun, what's the harm?