I've had a lot of half pads. I had a dressage-cut Ogilvy (OMG SO HUGE) and switched to a correction Mattes (fit, but no rear roll sob). Last fall, I decided that the Mattes was a little too bulky and creating pressure ridges under the panels of my saddle, so I needed something new. I went with the Invictus Necesse pad for it's super-modern tech, low profile design, and hell, I had a coupon.

The Invictus website does a fantastic write up of their products--the basic idea is that if you whack them with a stick, the pad "freezes" and aborbs the impact without transferring (much) of it on to the horse. Thus, your motion in the saddle is transmitted to the horse, but sudden impacts and jolts are filtered out. Seems cool. (Noted: this entire paragraph in laymen's terms. For science, ask a scientist.)
What that translates to is a thin, spine-free design half pad that's non-slip on top and mesh on the bottom. It doesn't have a washable cover or custom colors like Ogilvy, but after 6+ months of use, my white pad is pretty much a white pad and if I want to it to look more white, I could hose it off I think.

Here's an interesting one. Trends in half pads vary by discipline, so it's normal to have a dressage cut model and a jump cut model (see: Ogilvy, Mattes). Invictus doesn't. There's basically one size, one cut. I ride in a 17.5" dressage saddle that no one calls small, and it looks like this: 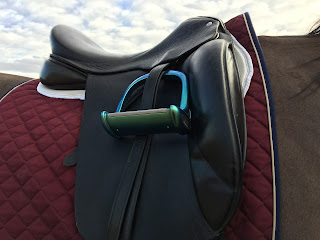 It doesn't hang out all over the place and it doesn't create ridges under the saddle. The front is a little more curved to accommodate a jump saddle, but it works just fine under my dressage model.

I never review something straight after I buy it. I like to put a lot of miles on it, get it dirty, clean it a few times, and generally abuse it. I mean, otherwise you get those hordes of fangirls that are all "SQUEEE I GOT X TRENDY THING AND NOW I FEEL TRENDY", which like. If you want to feel trendy, fab, but that tells me nothing about said product.

So after about six months of use, the Invictus pad has some black rubs on it from my black saddle, but those go under the saddle and don't change it's function. I've dropped it in the dirt, had sweat soak through the pad, whatever, and it's pretty much fine. No complaints here.If smudges bother you, maybe don't get white.

The Necesse pad runs around $250 retail. Ogilvy is $230, Mattes $230 (rear trim, no shims), Thinline Trifecta (shimmable, with trim) $180, Acavalla (gel+sheepskin) $220. There are others, but my point is, it's not out of sight price-wise, especially not when you consider the trendy half pad market. And hey, this is trendy + science! Winning combo. I paid somewhat less than the $250 and word is their are new options coming out, so the odds of hitting an old model sale are good. 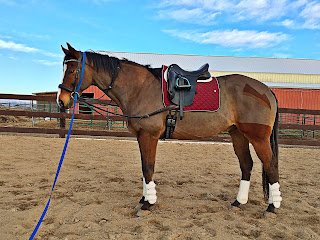 Is a half pad worth $200+ dollars? Eh. It depends what kind of issue you're addressing and how much you feel like spending.

Science sounding stuff in the name; compact and easily folds in half to store on top of my saddle; low profile design has minimal impact on saddle fit; clean and simple look.

This is maybe minor to some, but kind of big for me--I like to pull my saddle pad up into the gullet of my saddle so it's not creating pressure points on Courage's withers. When I did that with my mattes or ogilvy pads, they stayed right where I put them. This pad slides down and take the saddle pad with it. It technically stays off his withers still, but it does not stay where I put it. Thus far, it doesn't deeply offend me but I can definitely see it being a problem. 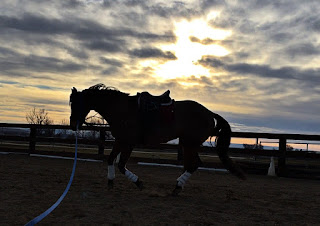 If you want something less than Ogilvy in terms of filling up under your saddle and are ok with completely giving up custom colors, this pad would fit the bill. I see it as more of a competitor with the old thinline pads before sheepskin and quilt. Those admittedly were even worse for wither relief, so it just depends what you're looking for. If you want to know if this pad costs enough money and drops enough buzzwords to give you a platform to look down on people who don't have one, I'd say no. It fills space. It's trendy. It's not magic.

If you want the latest and greatest in magical tech, this pad is right for you. If your saddle basically fits, it probably won't make it worse. If you're happy with what you have already, I don't think you need to drop almost $300 for this.
Posted by SprinklerBandit at 7:22 AM