I know I haven't done many updates on what the Cunafish and I are up to. Guess why.

Because we have done nothing. After three straight weeks of highs in the single digits (Fahrenheit), we got snow dumped on us, which then melted. Then massive amounts of rain on top of the melted snow, all of which froze solid and we got another snow on top. 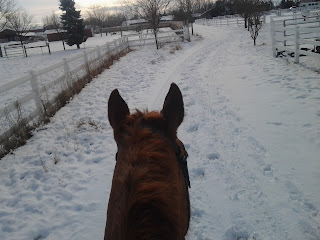 It only worked because Cuna is officially the Best Horse Ever. He always takes care of Cuna first and he never loses his mind or does silly things. At one point, I nearly had heart failure because I realized we were literally in the middle of a huge sheet of ice with a couple inches of snow on top with no actual grit or dirt to help him.

He just calmly walked along. 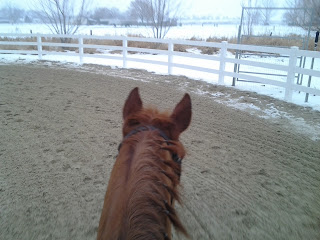 We did have one day post massive snow pre-torrential rains where the arena was quite nice. I braided Cuna's mane to get it respectable again and we had a lovely dressage ride.

I even got to work on my sitting trot a little, since he was so lovely and connected. :) 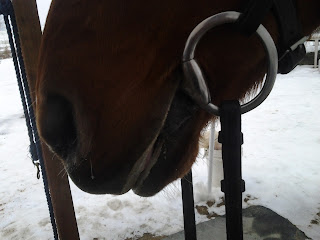 After the ride, I checked and he had slobbers! So huge for us. Given that he doesn't like dressage and I have no ambition to change that, we don't push to had here usually.

Except as it benefits our jumping, or course. The more we jump, the more concentrated our flatwork is.

We haven't been jumping. Not really a safe "on a sheet of ice" activity. 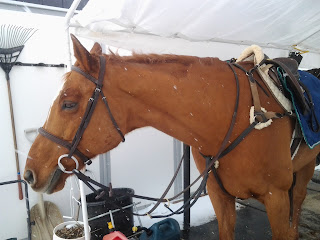 When it was really and truly unride-able, even for Cuna, we played dress up. I snagged another client's five point breastplate and tried it on Cuna. I think he looks pretty great.

We didn't actually ride in it due to the aforementioned sheet of ice. 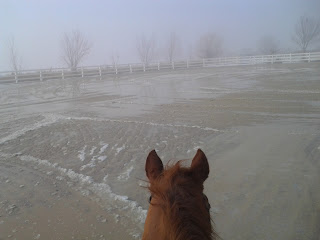 Now, due to the temperatures interacting with the water and all, we've been having some pretty intense fog. The fog keeps the sun from shinning enough to melt all the ice and let the arena drain.

Cuna and I have been merrily riding in our foggy slush lake in the afternoons. We don't trot much, but it is SO GOOD to be back in the saddle.

This winter can go die in a hole. Seiously. 2nd coldest January ever here. Hope February is better.

I can't be the only one without an indoor. Anyone else still trying to ride through this sort of crap?

Posted by SprinklerBandit at 7:16 AM