I have these long lists of things I should be doing. I have a list for my barn job, a list for my office job, and a list for my housework. That isn't even counting the list of stuff I really want to do like "read a book" or "actually finish writing something".

I've even been procrastinating on blogging because I have a list of things I ought to do here that I haven't even touched. The lists are so long at this point that I've just kind of mentally shut down. I'm vacillating between apathy and irritation and I'm over it.

In the spirit of just trying to move forward, here is a post things I am enjoying right now (no lists need apply). 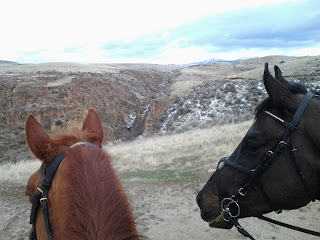 New hacking trail last week that led to some cool cliffs. Pretty sweet ride and Cuna led the whole way on our first trot set of the year. 18 is the new 6. ;-) 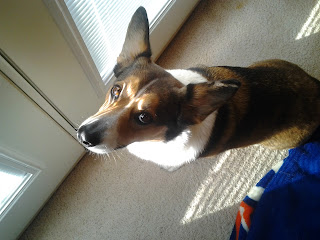 Happy corgi loves doggy funland aka "the barn". Here he is, waiting to go and being charming. 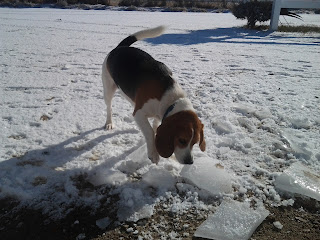 The beagle has actually run off less times than I would have expected for a hound and he loves every minute of being a barn dog. After the snow, he found some giant popsicles that entertained him for quite a while. 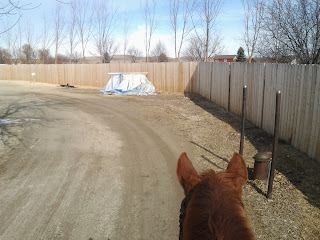 And today. The snow is slowing melting off, but the arena is still pretty frozen in the mornings (think lake). He had Monday and Tuesday off, so I tacked up, hopped on, and took him down the road. He went on the buckle most of the way and was just his usual lovely self.

I swear, it doesn't matter how bad the day has been, a hack on this boy can fix almost anything.

Maybe a longer hack with some hills would persuade me to start on one of those gnarly looking lists. Anyone else stuck in a winter funk?
Posted by SprinklerBandit at 2:05 PM