I've been making good life choices lately--I scored a deal on Ogilvy profile pads (my favorite!) but they came in the Eurocut design. That's... fine? I've never had Eurocut pads, but they're designed to flatter smaller, thinner horses with less heft in the waist area (if you know what I mean), and that definitely describes Courage. 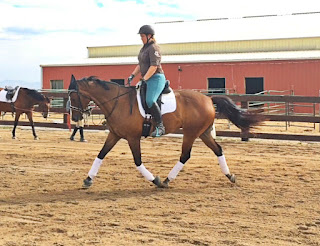 But before I'd even been able to try out my new pads properly, I also snagged ANOTHER deal on a Mattes Eurocut dressage pad.

So I went from 0 to 3 Eurocut pads in less than a week and still haven't quite established how I feel about the look. But hey! Let's compare these two manufacturers as long as we have the same pads of the same age.

First off, let's just look at what a Eurocut pad is.

It's pretty simple--the back of the pad sweeps up a little, which creates the illusion of depth on a smaller horse. Plus it looks cool. I think probably the looks cool part. That's definitely why I bought them. Plus sales. Mostly sales.


Here's the part I am the most intrigued by. I swear by my ogilvy pads. I'm unconvinced by their half pads, but their baby pads and profile pads? Damn. Unbeatable. Thin enough to wash well, thick enough to hold their shape, contoured enough to keep pressure off the withers and classy enough to look good. They're basically amazing.

But then I found Mattes.
This is the Mattes flannel pad side by side with the ogilvy profile pad. They are a similar thickness. The mattes is heavier--it's triple-layered flannel with very tight quilts. Per the salesman I talked to, the idea is that the flannel rubs against itself (like double-layered socks) instead of on the horse and the tighter quilts make for less motion, but also increase the cost of production. Also per salesman, Europeans believe that foam tends to be hotter, so the flannel is supposed to be a more horse-friendly option.

The ogilvy doesn't have "large" quilts, but you can definitely see the quality difference here. The ogilvy is still nice (and really, I should have compared the undersides too), but it's just more economically put together. It is foam-filled, which seems congruous with the memory foam half pad they also sell. The ogilvy is a very nice pad, don't get me wrong. It just doesn't offer quite the same luxury feeling that the mattes does.

This is reflected in the price. While I didn't pay full price for either, the Mattes runs $95 new and is rarely on sale and the Ogilvy is around $58 new and never on sale. Both manufacturers offer full custom options for no extra charge, which is brilliant.

Mattes also offers an option for foam inside the pad--I passed on this. It made the pad thicker than I like and I was told that the foam expands and contracts during the washing process which harms the longevity of the pad by loosening the stitching in the quilt.


Obviously, both pads are Eurocut, but there is variation within that style. I took a couple of shots with them laid side by side.
They are both definitely contoured for wither relief which is a big deal to me. I ride thoroughbreds with big withers who are deeply sensitive. Both do the job--I mildly prefer the mattes in a head-to head because the angle at the top is a little more severe and it doesn't slid down at all. The ogilvy is still perfectly serviceable in this area. Also, this is a pretty personal thing--if your horse/saddle are shaped differently than mine, you might have different results.

The cut is different through the pad too. The Mattes is a large and the ogilvy is a regular (I think?). Pad sizing is confusing. Regardless, they both go under my 18" dressage saddle no trouble. You can see they're similar in length across the top.
The ogilvy fans out a bit-- if you go back to the top of this review, you'll see that it has a bit more rounded cut in the back. The mattes falls pretty much straight down. The mattes is maybe 1-2" narrower because of that, but then it's maybe an inch or two longer in the drop. These are pretty minor differences. I think they both look fine on my saddle, but if you're fitting a pony-sized critter, inches can matter.

Herein lies the rub. (ahaha! I am HI larious). How do they hold up? There are plenty of people who advocate for things like $50 gloves instead of $10 gloves because they last longer. (I'd be convinced except I lose my $10 gloves well before they wear out so your argument is invalid).
Obviously, the ogilvy is the "budget" option*. It clocks in at $58 US and can be had with free shipping if you try a little. They are also carried in VERY OCCASIONAL stores and while that is brilliant, it is also unexpected. Almost no one just stocks dressage ogilvy pads and those who do are apparently haters of fun colors. Unless you count navy. (Not really).

The Mattes comes roaring in at $95+, which makes it a pretty big splurge, even with a kickass sale. Mattes is pretty ubiquitous in the dressage world and somewhat easier to come by, though I will confess as a new DQ and fledging linen collector, I haven't looked for these specific pads in as many places. Maybe all DQs only order custom? Don't know.

I will say that I've put hard workouts on both pads and they have done the job. They stay put without the use of extraneous straps. (I will will run my billets through a loop. I cut wither straps off. That is all.) I haven't had any rubbing or issues.

The mattes presumably costs more because it will last longer. To that I say, we will see. I've had my oldest ogilvy pad about two years at this point and it's going strong. I use it constantly and wash it regularly (SOMEONE can't function with a dirty pad). I will say if you want a more luxurious feel straight out of the package, the Mattes definitely is a bit more high-end feeling, but until it's survived two years+ of daily abuse, I'm not sure what to expect.

I still don't really know what I think of the whole Euro-cut thing. It doesn't offend me, but is it the latest greats thing for C? We will see. I'm actually less interested in the shape and more interested in putting lots of use on all the pads to see what stands up. At last! A luxury argument I can get behind.

*I know, I know. So much money for linen!
Posted by SprinklerBandit at 7:00 AM