Houston, We Have a Problem

It's a real serious problem too.

See, Courage started his trainer rides last week. I got a ride report on one and I got to watch the other. They were fine. He didn't magically turn into a confirmed third level packer (dammit). He wasn't so much brilliant as solid. He tried hard, he learned, he tried pushing trainer's buttons because sometimes you just gotta live the asshole life.

So basically, I put a nice ride on him Monday, then trainer rode Tuesday when I wasn't there, then I toodled with him Wednesday, and I watched trainer ride Thursday. That means I hadn't really "ridden" since trainer rides started until I tried to ride him Friday. 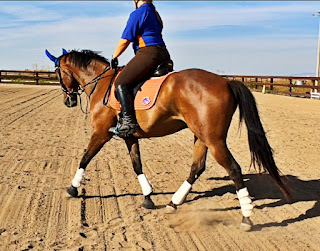 and OMG trainer broke my horse.

And not in the way that I expected. See, I wanted to get on and make sure he didn't think asshole life was a thing that was ok. He'd been a little naughty about his right lead, so we were going to do a bunch of right lead canter go get that shit SORTED OUT.

Because wtf all of a sudden C is like "bitch please. you want canter? you have to sit up and hold the contact and keep your leg on and use your seat in the magical dressage way and THEN I WILL THINK ABOUT IT."

Dude. Horse. I have trained you to half ass it for three years now and we both know that if I sort of tip forward and throw away the contact and maybe take my leg off, that OBVIOUSLY means canter.

Now he has STANDARDS and EXPECTATIONS and I actually have to ride. Which BY THE WAY, is freakishly hard and not my norm. It was so hard I even bitched about it to my friends.
You don't mess around with ass cramps, ok?

I'm not sure I'm ok with this development.
Posted by SprinklerBandit at 7:00 AM