A Funny Thing on the Way to the Forum

When I got back in to horses as an adult, I wanted to do the jumpers. When I had a successful season on Cuna, it was a build up to moving into straight jumper land.
And when I got Courage, he was supposed to be my jumper.
Are you sensing a theme?

I like my saddles brown with forward flaps and graceful curves. I like my colored poles that fall down.

But here I am three years later, making the transition to full (for now) DQ. While I make no promises about my trajectory as a rider if something were to happen to C, it appears that the next +/- ten years are going to involve a tiny white sandbox and an over-emphasis on out-of-sequence alphabet soup.
I spend 90% of my time in a black saddle with long flaps these days, but I've always been way more comfortable in shirt stirrups and forward flaps. It's how I ride through all the things Courage throws at me and it always has been. Dressage saddles are for horses that behave, not ones that are losing their minds.

But then we went to our little open show and I had zero compunction about throwing the brown tack back on the beastie to look the part.
The weirdest thing happened--I felt absolutely uncomfortable and out of balance. I was virtually incapable of riding without a death grip on the neck strap of my martingale. I assumed it was show nerves and just sensing Courage's underlying tension, but in general, I don't get that weird about shows and this was just a whole 'nother level of fail for me as a rider.
My first ride back at home was in the dressage saddle. The moment my seat hit the saddle, I was 100% comfortable. I was confident. I knew I could ride anything Courage threw at me, even if it was residual tension/flailing from overloading in the show environment.

It's carried forward, too. My next ride was outside. It was also massively tense (because reasons), and instead of a death grip on the martingale, I felt my hands stay light and giving while my legs draped nicely around Courage's sides. I felt the tread of my iridescent stirrups and I comfortably rode the horse I had in the moment. 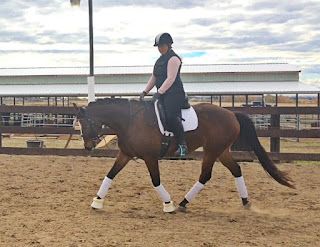 I'm not saying I'm some sort of dressage maestro--I most definitely am not. I still tip forward, do funky things with most every body part, and haven't really addressed the sitting-trot-shaped elephant in the room (but I think we're doing another season at first so whatevsies), but apparently my body has finally learned to relax with those long black flaps.

I guess we've found our new home.
Posted by SprinklerBandit at 8:48 AM