As I told a fellow boarder, Ms. Zoebird has more rides on her than I have fingers now so probably it's a great time to go trail riding. I lined up the two most broke horses on the entire planet to go with us, and this weekend we loaded up. 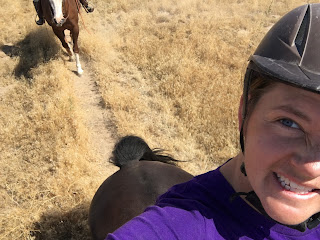 Noted: ZB has limited trailering experience--her last owners hauled her 3-4 times and then her last trailer experience was when Roxie's mom stuck her in her (luxury liner) trailer and hauled her all day to our barn.

All that to say. If the little lady was like "ehhhhhhh i dunno" about loading into a strange rig, I couldn't have been too upset with her.

But instead she marched on like a freaking champion.

She unloaded like a champion. And remember. She's been very few places. She's four. This is her first off-property trip with me. It's her first trail ride. It's off a semi-busy road. There's a lady with a weed whacker directly across the street.

And uh. Yeah.
Zoe like. Looked around a little. Was a little pushy on the ground. And I was like "stop". And she stopped.

WHAT EVEN IS MY LIFE

I got on first because I wanted someone on the ground to grab me if things went sideways I guess.

She was fine. We went through the scary gate. We started motoring down the trail.

Motoring as in Zoebird thought her friends walked too slow SO SHE JUST LED THE FREAKING WAY LIKE A FEARLESS BADASS TRAIL HORSE.

Anyways. I did have brakes. I made Zoe follow the lovely brave painty mare because that just seemed like a better idea for everyone.

And you know what terrible naughty thing she did then?

At one point there was a big, scary stump right off the trail and Zoebird was like WUT IS THAT SCARY? And the other horses ignored her so she just walked past it.
We saw a hiker with a dog. Zoe wanted to go put her smooshy nose on them SO BAD but when I said no, she just stood politely with her friends until they went past.

We went all over the park and followed lots of little trails. Zoe is not always the best at remembering how many legs she has, so she tripped more often than the other horses. One loop took us back in the direction of the trailer so she was like SMART ZB KNOWS WHERE WE R GOING FAST and tried trotting a couple times.

She didn't jig. Didn't throw fits. Didn't get mad. And when I asked her to walk, she just walked.
About halfway through, my brain finally kicked things into gear and I realized I was actually having fun on my baby horse on her first ever trail ride. Loose rein. Smiling. Felt totally safe.

I mean, she's definitely a baby. Steering is still kinda, well, babyish. She kept wandering off the trail.

But that's literally the worst thing I can say about her. 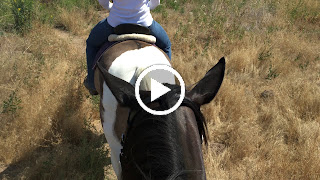 To finish the ride, we had to cross through a marshy area and go over some concrete pipes that are partially exposed. Zoe trooped right up until the marsh and then was like HO SHIT GUYS DANGER which I think is a 100% rational response to the ground changing under your feet. The steady eddies were both not thrilled about the footing. It took some encouragement and a lead horse, but after a while, Zoe went through the marsh and up onto the solid ground.

But then the concrete pipes are right there.

And she was like HO SHIT WUT R THAT NO PlZ DO NOT WANT. (There are no photos because I blogger failed you).

Anyways. She'd been so damn good. She had literally just made it through the marsh with the sketchy footing. We were less than 100 feet from the parking lot. Oh and her "ho shit" response is literally looking at something quizzically and not offering any naughty behavior or getting agitated.

I just hopped off and led her over the pipes. She went first try with zero resistance and did fantastic. Calm, positive experiences. Next time will be better.
Oh yeah. And loaded and unloaded like a freaking champion. Again.

I just. You guys.

What do I even say? She is the coolest little lady and I am so lucky to have her.
Posted by SprinklerBandit at 7:00 AM