I've been contemplating writing a draft cross vs. ottb sort of comparison (because trust me, ITS WAY DIFFERENT), but the truth is that I haven't had Zoe two months yet and there is so much more for me to learn that I have no business saying too much. Yet.

I think one of my favorite (and least favorite, haha) things about Courage was how hard he pushed me to learn and do better both by him and in my own life. It was a challenge, but I definitely think I'm a better horseman and human because of him. 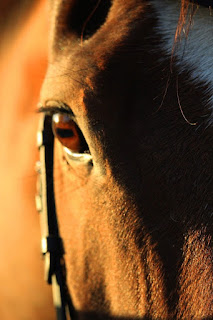 The whole point of Zoe is that she's NOT LIKE THAT and I can just go DO THE THING.

But Ms. ZoZo Bird is still a horse.

And when Roxie's mom came out to play last week, I showed her what we were working on. We talked about where Zoe was at and what I was doing and why and what she's done with her drafties and why it worked.

That got me thinking.

Zoe is a lot of things, but none of those things is a thoroughbred with track baggage. Which like. Is the entire freaking point.
But then why am I riding her like she is?

I mean, the "horse" thing transfers a lot--we take baby steps and build from the bottom up and do ground work and go slow. But there are differences. For example, I just spent four years riding a horse that LOST HIS SHIT if I ever sat down on him. So I just didn't. I'd do a happy lil jumper perch and go around off his back and everyone was happy.

But you know who motorcycles around COMPLETELY OUT OF BALANCE if I get way ahead of the motion like that?

Oh yeah a Zoebird lady. She actually prefers I sit down and give her half a chance to get her balance. In spite of being a big girl (15.2 and 1200lbs per the weight tape), she's soooooo sensitive to what I do in the saddle.

She's quieter than Courage, that's for sure. But quieter doesn't mean passive. Quieter just means I have to listen better and think differently. 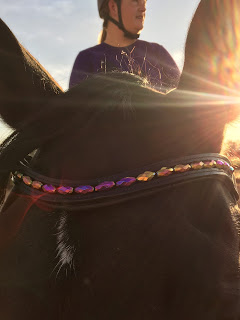 And if I ride her the way she tells me she needs me to, the little lady tries her hardest.

And that, folks, is the coolest damn thing.
Posted by SprinklerBandit at 7:00 AM