As a person who's spent all of my time around horses with animals that were 50% or more thoroughbred, I had a lot of illusions about draft crosses. I think the biggest one for me was that because they weren't super reactive, they also weren't very intelligent.

And as a reasonably intelligent person, I didn't want to deal with a "dumb" animal.

Enter Zoe.
Training her is fascinating for me. Remember when she started putting on the (literal) brakes out of the blue?

Well except it wasn't out of the blue. What preempted that was me realizing that my goofy brain was going U GONE GIT RUNNED OFF WIT BECAUSE U GOT NO BRAKES, which is clearly ridiculous on a horse that stops when you stop kicking. But brains will do what brains will do, so I taught Zoe a one-rein stop to appease my brain. We literally did it three times one day.

Annnnnnd the next time she was ridden, she started doing the STOP AND FREEZE response.

So she not only learned it, but was also willing to show it off to me to prove that she understood. 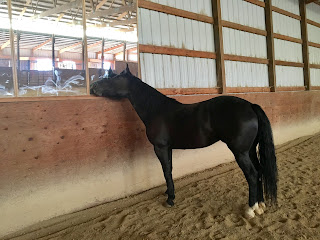 Another thing we've been working diligently on are our turn on the forehand/haunches. We do them on the ground, pre-ride, and then at the end of each ride. Except the other day I mixed it up and did them in the saddle at the beginning on the ride. Zoe was a champ, like usual, but then every time I asked her to halt (normally, not one rein haha), then put my legs on to ask her to go again...

Like I'd asked her to earlier.
When I finally started to put it all together, I laughed. Here I was concerned that somehow the little lady wouldn't be "smart enough" for me and instead she's the smartest horse with the most try that I've probably ever worked with.
Posted by SprinklerBandit at 7:00 AM