A Progression in ZB

You know what we haven't done in a while?

When I met ZB, she was a loveable 4 year old with an impossibly smooshy nose that seemed almost too large for her rather-slender body. She was 15.2 on a tall day and had the best lil attitude about absolutely everything.

Everyone warned me that drafties grow until they're 8 so it worked out that my whole life fell apart shortly thereafter. I mean it didn't work out for me for a long time (tho it did eventually), but this is a REALLY NICE PHOTO that ZB's other auntie took the next summer annnnnnd yeah you can see that her dimensions have changed a lot.

I was going to post a summer vs winter picture for each year but 1) apparently I don't take a lot of winter conformation shots without tack on and 2) uhhhhhh let's just agree that some of those winter growth phases DO NOT need to be more documented haha. Instead, let's look at summer 2019 when the pieces actually started to come together for my little lady.
You'll have to use some imagination on this one--I have a habit of not living in state in the summer (or at all SOB) so this was my best conformation shot in like 4 months. Whoops.


I now realize I probably should have been more diligent about documenting her growth--I think she's about 15.3 in front and 16.0 behind now. My logic is that I can get on her from the ground so she can't be that big. SOME PEOPLE are fond of pointing out that if your horse is roughly the same diameter as your couch, it keeps your hips more mobile. Whatever her height, she's the right size for me.
She does seem to have leveled out the exponential growth at least--her balance is more consistent and hey, she looks like this:

We're going into her 7 year old winter now feeling fit and sassy. We both like variety and adventures, so we're spending time learning to neck rein and do a western jog but also working hard on the canter (and omg transitions) in her english tack with plenty of trail rides and jump days thrown in. She is coming together SO nicely and I can never emphasize enough just how lovely she's been to work with for the entire process.
She has a fantastic back end, a natural over track at the walk, solid bone, and an amazing brain. I could talk about how her conformation impacts her athleticism or how her breeding informs her dimensions, but you know what's most important?
She's just so much fun. 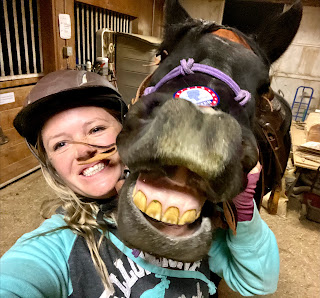