Things are going. Cuna was doing really, really well. He was to the point that I was thinking he'd come off the bute early and we might be in the saddle by this weekend.

A little stiff, a little off. Then more stiff and definitely off. Still a thousand times better than pre-vet appointment, but not good. We made some diet/management changes. Today he is back to bilaterally uncomfortable, but not in pain and not noticeably more lame on one leg or the other.

I'm trying to be positive. He is better than he was. He's interested in life, expressive when grooming, and enjoying his turnout time. He can walk. He's bright and perky and calls to me in the morning. He's back to pretending to be a grumpy bastard all the time, which is hilarious. 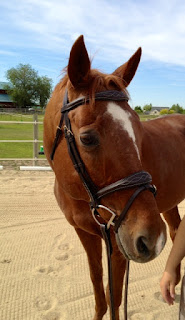 In the interest of remaining positive, I got Cuna a new bridle (of course). I loved every detail, which usually means it will look shockingly bad on him. It came yesterday and Ellie took a couple of pictures on her phone of him wearing it today.

I wasn't sure at first, since it's pretty busy, but I think I kind of love it. It's a Mark Todd anatomical bridle with fancy stitching, a padded monocrown, fancy ass crank, removeable flash, and buckles everywhere. 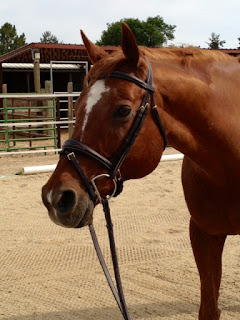 
This time, I think it works. It might be his look. I think I've finally found the compromise between the big padded things I love, and the refined look that suits his handsome face.

Plus obsessing over bridle fit (and how much I want to spend time conditioning and fiddling with the leather) is keeping me from obsessing over soundness. 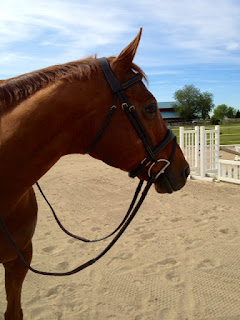 Those jumps aren't going to jump themselves.

Posted by SprinklerBandit at 12:03 PM