Way busy in my part of the world, so I figured I just wouldn't blog again until after Labor Day. HOW IS IT ALREADY THAT WEEKEND? Anyways. It was a foolproof plan right up until I went trail riding with redheadlins and we plotted an introduction to cross rails for Courage. Omg! I know. See came out to set fences/be eyes on the ground/pilot if I needed help.

Noted: she has a lot more confidence in me as a rider than is probably deserved. So it goes.

I got up early and set a fun baby sized jump course, then got Courage all blinged out for the occasion. We can't be looking boring for our first time over fences, now can we?

For reference, he's currently going in a double jointed happy mouth loose ring bit and the flash is simply for looks. He can (and did) graze with it on. I actually think he seemed to like the extra stability from the flash and was a little quieter with the bit, so I won't yank it off right away.

And you have to admit, the sparkles are pretty much adorable on his little face. This browband was too much for Cuna, but it's just right on him. I knew I'd find a use for it!


We started with a nice, long walking warm up. I tried to keep him on a loose rein and moving in shallow serpentines to stay focused on the arena instead of everything around it.

He was a little up for him, but that means I was still working to get him forward.


While we walked, I took him through some ground poles to get him thinking about his feet and body in relation to obstacles.

He always trips a little the first time through, then is very careful the second time, and rarely touches a rail after that. I love it.

We moved right along into the trot. Because I haven't been drilling him over the ground poles up until now, we just trotted the sets of three or less so he could figure it out in a very low pressure way.

I tried to keep him forward (somewhat successful) and straight (needs more work next time). As per the usual, I rode on a pretty loose rein. It makes him responsible for his balance, keeps me honest about my hands, and panders to my pathological need to carry my thumbs down.


One thing I love about working with this little guy is that it doesn't matter what I face him with--he attacks the challenge with enthusiasm and attention and genuinely wants to figure out what I'm looking for.

After he figured out that today's game was going over ground poles, he pricked his ears up and started looking for poles to go over. 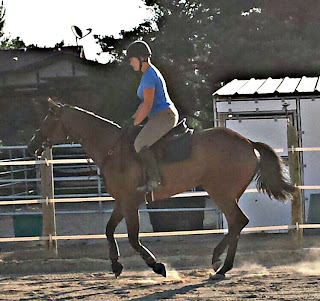 We rolled on up to the canter to make sure he was loose and relaxed. I don't do a lot with the canter just yet because I still think the confined space in an arena is hard for him to process, but he's getting more and more comfortable and I'm able to sit in the saddle more than I was at first.


Without too much more ado, it was time to go for it.

It seemed a little surreal to point my own little Courage at his first tiny X and tell him to go. He trotted in, slowed in front of it, muddled over it, and took the whole thing down.

At least we aren't afraid of rails coming down. 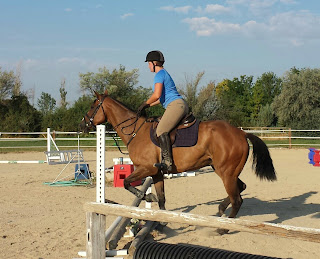 Once he established that I was actually intending for him to go over the tiny X, he merrily headed towards them with his ears up. He is still sorting out with to do with all those legs and where exactly his shoulders/hips/neck are supposed to go, but he was game to the fences.

I wasn't as straight as I'd like to be, but I tried to ride him positively after the fence and stay forward, and he was excellent. He even had his first little tiny scoot with me on board, which was pretty hilarious. 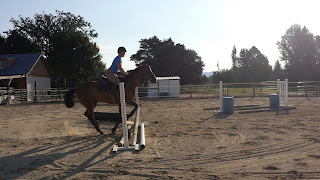 It was a lot for him to process, but I was super impressed as he would gamely trot in and then try to figure out where we were headed afterwards. I kept mixing it up--left turn, right turn, uphill, downhill, but he tried his hardest and I couldn't be happier.

Given his propensity for training himself, the plan is to let him think about it for the next few days and address our straightness/forward issues on the flat. I suspect that once he thinks it over a bit, he's going to be even better than he was today.

Posted by SprinklerBandit at 5:17 PM