First things first: Amy and Steady are running a sweet contest that I want to win over at Slow and Steady Wins the Race. Check it out! Don't feel compelled to enter though--the less people enter, the better my odds. ;) 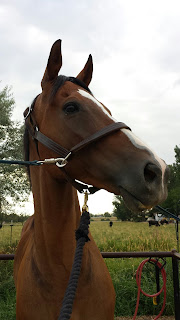 Ok. So. Our beloved eventing trainer hosts a cool potluck/jumping night once a week for all comers. There's a wee baby group and an actual jumpers group and it's low key good fun. Naturally, that seemed like a good place to take Mr. Courage for his first outing as a "jump jump horse".

Redheadlins wrangled a trailer and her four year old mare and picked us up. Courage loaded like a champ (because, yeah, OTTB and all) and we were off!

He nearly fell out of the trailer when we arrived, possibly because he didn't know trailer rides could last less than 10 hours. Or maybe he forgot how to use a step down... not sure, he's definitely been on them before and did fine. Regardless, we unloaded.

He did his worst.

Which is to say, he stuck his head straight up in the air and looked at things while standing still. So wild.

We did a little ground work to get him semi-focused. Simple walk/halt/stop and chat/walk sort of thing and his poll dropped right down.

We tacked up with zero drama and headed out to the big arena. It was the largest space I'd ever taken Mr C in. It was also the busiest--we've ridden with one other horse in a much smaller arena, but there were at least 6 horses going all different directions and steering around jumps while the neighbors did construction on one side and fiddled with the irrigation on the other.

We did a little more easy ground work and let him get the lay of the land.

And then I got on.


Horses cantered by, jumps crashed down, trucks and trailers came and went, no problem. We chatted with many of the participants, walked around on the buckle, looked at stuff, and overall had a great time. We even left the arena and hacked around with another rider. Her (young, green) horse was a little looky, but Courage bopped along on a loose rein and never put a foot wrong.


I want him to learn that trips are fun, easy, and low stress, so we didn't do anything other than cruise around at the walk and take in the sights. Really, I couldn't be more impressed. Not a spook or a jump or a jig or even a suggestion of anything naughty. Didn't matter that he was in a new place with new horses doing different stuff.

You're probably all sick of hearing this by now, first about Cuna and now about Courage, but I seriously have the best OTTBs ever, bar none.


Posted by SprinklerBandit at 6:31 AM