I haven't said anything about Cuna lately. I'm letting him have a break, physically and mentally. I needed it emotionally almost as much. I adore that old red man and he made me into the rider I am today. It was beyond gut wrenching to watch him come through his last round of lameness and I'm in no rush to try it again.

Here's the thing. He came to me for a specific reason and he more than accomplished that. I wanted him to carry on and be a fancy show horse, and he's letting me know that as much as his heart is in it, his body won't hold up to it.

The vet told me that there was no benefit to making him limp. It's not something he's going to work through. It's something that requires healing. Sometimes more. Sometimes less. Sometimes longer. Sometimes shorter.

So Cuna moved to his new home--a giant pasture he shares with a couple of nice geldings. We pulled his shoes as per his farrier's advice and took away his grain. The old man hangs out and enjoys life. He has the other ladies at the barn wrapped around his goofy hooves and they love him. I visit him four or five days a week. I tell him about Courage and life at the track (as if he didn't know!) and I groom him, pick his feet, and scratch his itchy spots.

I look back at the pictures of our time together, and it makes me cry a little. I can still feel him taking me to the jumps, his red ears locked on with perfect focus. I feel the confidence and security that he taught me, and I know my life won't be the same now that he's been here.

My show friends keep asking when he's coming back. I tell them the same thing every time. He's taking a vacation. Maybe we'll hack around this fall. Then he's taking the winter off. 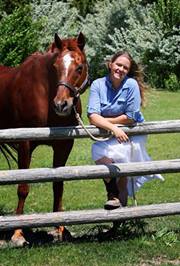 And that's it. I'm not making plans for him. I love him. He gave me more that I could have hoped for and I have no right to ask for something beyond that. Maybe I'll find another field for him that backs up to trails and he and I can explore the mountains like we used to. No more collection. No more drilling. That's my favorite dream. We'd both love it.

So we're healing together. At our own pace. And it's ok.

Posted by SprinklerBandit at 6:18 AM