I'm still here. Thank you for all your kind words. I feel lost. The whole thing is just so unreal. Cuna was supposed to be with me forever--or at least another ten years or so.

I know I did the right thing for him and I'm glad he's not in pain any more.

I'm left with an overwhelming feeling of gratitude. That old red man changed my life in so many ways. It wasn't just that he let me learn to ride again. Everything about him, my Cuna Matata, everything made me a stronger, better person than I was the day before he paddled his way into my heart.

Every time I think about the last two years, I just shake my head. I couldn't write this as fiction because it's just too sappy and serendipitous and unreal for anyone to ever believe it, even in some crazy teenage horse story. I was terrified and miserable and ready to walk away from horses.

And then he came. Not only was he huge and handsome and perfect for me, but his silly name was Hakuna Matata. No worries. For the rest of our days.


He was standoffish at first, but I wanted to be friends. I bought him a giant bag of peppermints. At first, he'd only take one a day from me. He was closed off and distant.

He taught me about that ridiculous crazy love that makes every moment apart seem unreasonable. He taught me just how much fun we could have together. I could (and did!) ride him everywhere. It wasn't just the riding and jumping. It was the day to day existence, that tacit understanding that everything was ok, because no matter what, we were together.

I faced all kinds of struggles because I had to for him. I dealt with difficult personal situations. I dealt with uncomfortable work situations. I had to push myself, grow as an individual, and become stronger inside and out. It was never easy, but I can look back at the changes I've made and know that today, I am a better, stronger, wiser, and more compassionate human being because that old man horse just patiently waited for me to figure it out.


Not to paint him as something he wasn't--Cuna would never suffer the fools. He demanded a strong ride with the softest hands. He absolutely required steady legs and a still upper body. He only approved a very few riders and I was lucky to be on that list.

He was noble and he was incredibly goofy. I'll never forget the day he fell in love with the new mare--his head straight up in the air, his silly whinny every time he paddled his way out of his stall to assure the mare that he was still there. And then of course, when I put him in the cross ties and he kicked out to impress her... and his shoe went flying through the air.

Even now, I laugh.


I treasure the memories of our long solo trail rides through the mountains. We explored everywhere. No matter what, I knew I was safe with Cuna. Big loose dogs would run up to us barking, and he'd just stand his ground and wait. As they got close, he'd lower his head down below his withers and look at them. It never failed. No matter how big the dog, when they got close to the sheer enormity that was Cuna, they quieted down and backed right up.


There was nothing like the feeling of our early morning gallops. When prepping for our season at Beginner Novice, I probably had him fit to run training. At least. We hacked up the trails until our favorite gallop stretch and then let loose. I never had to ask him to go--I just had to let him know it was an option. The wind whipped my face and made my eyes run, but nothing could wipe the smile off my face. He'd gallop all the way to our finish line, a sagebrush at the top of the long stretch. Then I'd drop the reins and he'd drop to the walk, and we'd hack home on the buckle.

We chased coyotes and watched deer. We laughed as the young horses spooked and galloped around us. My favorite was when the training horse behind us bolted and bucked past us. Cuna would never lose a race, but he didn't even flick an ear as the horse galloped by. He knew it was trouble and far be it from him to participate in that kind of shenanigan.


And we jumped. Little things at first--he let me just sit there while he packed my butt over tiny fences again and again. I didn't even have to put any leg on as long as I didn't pull on his face. When I finally got myself sorted out, we moved the jumps up like it was no big thing. I jumped higher and rode better than I had in my entire life. He demanded that I ride well once the fences went up, but he was more than fair.


He was so big and inflexible anyways that I knew that if I had him pointed in the right direction three strides out, we were going to the fence. He might stop, but there was no way he could turn the whole Cuna in time to run out. Some people thought that was a drawback--I always saw it as an advantage.

Both of us hated dressage. Who wants to play in the sandbox when there are trails to explore? I do love ribbons though, so we took a few lessons and got sort of good. He gave me everything he had, but he was such a big fellow that sitting down on his hocks required a hell of a lot of expensive maintenance.

He was worth it. In our last six months under saddle together, he kept pace with a prelim event horse in the hills, hacked quietly down busy roads, put in a solid jumping effort in a fancy clinic, and won ribbons at a dressage show. He really did it all.

Even when he retired, he kept me grounded. It was under his watchful brown eyes that I extricated myself from some unpleasant personal situations and made decisions about my career. He'd look at me and somehow, he just knew. And because he knew, I knew it was ok. He made the hard things simple. Hakuna Matata. Life will go on.

I didn't go to the racetrack to get a horse--I went because I still loved horses, but it hurt too much to hang out at Cuna's old barn and watch everybody else jump. The racetrack was a haven for me, a place to have fun and connect with the old man's past a little bit.

And then I met a horse named Courage. 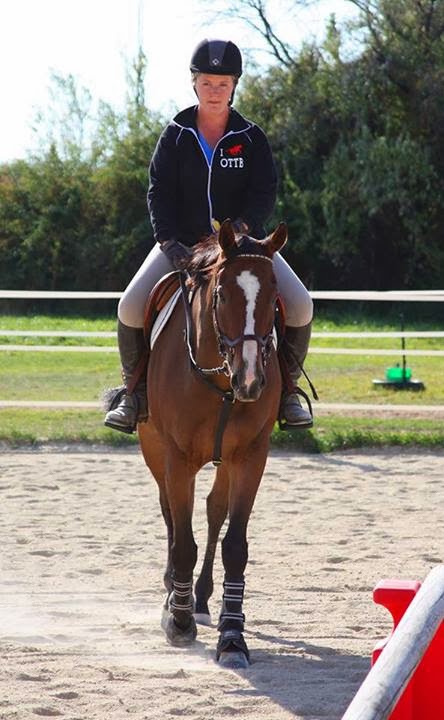 It was too much. Too sappy, too silly. Hakuna Matata brought me to Courage. At the time, I thought it was sort of symbolic--Courage to overcome the obstacles of the past, courage to become the person I needed to be.

Over the last month, I've realized that there was more. Courage from the past, yes, but courage for the future. Courage to make the hard decisions. Courage to do the right thing. Courage going forward.

Courage is Cuna's legacy in my life. Courage to breathe, to live, to love. Courage that I can overcome.

Courage. The little bay face in the barn.


It's too serendipitous and sappy and poetic to be fiction. No one would believe it, except that it's true. I miss the old man horse. I want to believe that I'll see him again. But I know that whatever happens, the hoof prints he left on my heart have made me a better, stronger person and I'll forever be grateful to him for that.

The one and only
Posted by SprinklerBandit at 11:31 AM