Moving A Green Horse Up the Levels

After my super awesome pictures from yesterday, several of the commenters raised an interesting point--Courage obviously has great form over fences and is plenty scopey--how soon do I move him up?


I've thought about it. There are a lot of different answers to that, so I've made a a helpful graph to illustrate the rates of speed at which a horse moves up the levels.

As you may have noticed, I tend not to push horses. Courage came off the track at the end of July last year, and we spent the whole fall putzing around and having fun. We did the ground poles at a local show and a baby cross county clinic (which doesn't count because we only jumped crossrails in an enclosed field). We worked on things like "not doing giraffe impersonations" and "going forward".

And then he took a couple of months off.

When he came back this spring, I had a whole new horse. His body felt great and his brain had some idea of what to do, so we have progressed in leaps and bounds.

I also think our cross country weekend was really good for him--we got to ride twice a day and figure somethings out and just make pure, unadulterated progress. 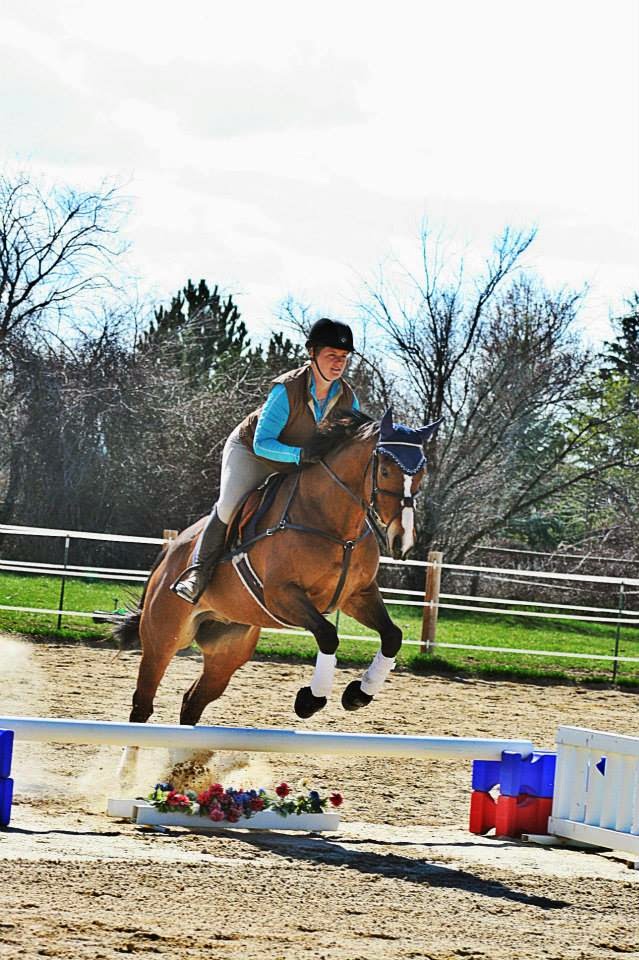 My philosophy on training is to increase the pressure, then allow the horse to get comfortable before increasing the pressure again. I realize there's an element of the horse learning to deal with more pressure and running that line more closely, but I am nothing special as a horse trainer, so I prefer to go a little slower and take things easy because I'm the only one who has to pay if I screw up.

So to me, this shot from the other weekend shows a horse that is completely comfortable.


And this shot from Monday shows a horse that is _very_ impressed with a jump.He's still plenty safe, but he's feeling the pressure of new questions.

He's tidy and clever and all is well. Because I want him to end up being a happy, fun, comfortable ammy hose (for me), I want to let him get comfortable with the height and level of fill that we're presenting him with before I move him up again.


Much like our flat work, it's going to get easier as we go on. It's already "clicked" for him that when I point him at a jump, he is to jump over it. Now I need it to click for him that even if the fill is scary, he's going to be ok.

This jump is actually taller than the panel or the barrels and he's just fine with it. I suspect in another ride or two, he'll be completely over everything we've introduced thus far.

And then we'll introduce more. Oxers are on the list. Rails over barrels. Jumps in fields. Related distances. Bending lines. Triple bars.

Courage has a lot of aptitude for jumping. He's good at it and he enjoys it. He's a wicked smart horse and he tries his little heart out. As his owner/rider, my prerogative is to let him develop without pushing too hard and frying him.

Good news for him, I am the best at not pushing horses.

He'll move up when he's ready. When we're both ready. I suspect it won't take too terribly long as long as I keep things fun and interesting. So yes, a more competent ammy or good pro could probably move him up a lot faster without frying him. I'm working within my specific knowledge base and set of limitations and everyone's having a good time. Seems like a plan to me.

Posted by SprinklerBandit at 7:21 AM