Some of you may remember the time I broke down frame-by-frame the most perfect jump Cuna and I ever had caught on film. I thought it was a pretty great post.

Well, now we're doing it again. Only like... the other way around. Instead of a "how to jump it right", let's talk about "how green horses jump that sane people wouldn't publicly share on their personal blog".

Because, what fun is sanity anyways?


This is Courage and I in a jumping lesson. He's been going through the grid and the jump has been raised incrementally. We've just added a back rail, which means that in order to clear it, he needs to maintain impulsion to be able to jump both up and across.

Unfortunately for me, Courage saw the new question and backed off while he tried to figure it out. I added leg, but he's not quite broke enough (or obedient enough) to respond yet.

So here he is trying to answer the question by leaping AS HIGH INTO THE AIR AS POSSIBLE!!!

Of course, the more discerning among you are saying, "But SB, if C-rage expends all his energy launching straight up, how does he plan to carry himself forward so you don't land in the middle of all those poles?"


Not to worry folks! Courage has no intention of hitting that monstrous jump. Obviously.

The only thing to do at this point is to suck his hind end up and LEAP LIKE A DEER!!! It's a little less efficient than, you know, pushing forward off his hind end. Take it from me, though, the little man can get the job done.

Now you might critique my position in these shots. It sure looks like I'm jumping up his neck in the first one and here I'm sort of levitating above his back with completely useless legs and that oh-so-helpful indirect inside rein.

Those are all valid observations. I would welcome any and all position help, because trust me, it's all about to go downhill...

Well, all but me anyways. I stay up about a half second longer than Courage does because physics are (not) my friend!

Ahem. So the reason that upper level jump and event riders advocate for a "bascule" over a jump in which the horse springs up with his front end, pushes off with his hind end and his body describes a lovely arc in the air is because the rider is capable of staying in balance with the horse and equitating all the way through.

If the horse rockets straight up, then generates forward momentum by sucking his ass up to his chin, well, instead of describing an arc, you are describing a roller coaster ride, complete with long uphill climb and then dropping directly out from underneath you at the apex.

So keep all that in mind as we approach the next stage of the jump.

I know you're all thinking "well, it really doesn't look THAT bad. Like, what is she complaining about? Lots of people jump 4' on green horses and it clearly isn't the end of the world."

At this point, I should probably just give it up, throw my hands in the air, and hope for a decent picture. My vanity forces me to point out that not only did we clear this jump, but Courage landed in balance and cantered away AND I STAYED ON, but I probably shouldn't brag about that unless I want to get bitch slapped by karma. 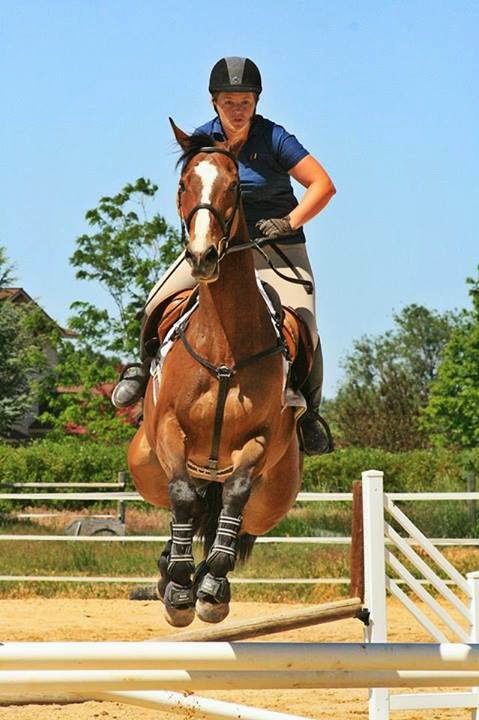 So... boys and girls, this is why all that flatwork I talked about yesterday is important. This is what happens if your green horse isn't recognizing you as leader (leg=go now) and isn't broke enough (hm, maybe I should have some impulsion) to save himself. We certainly have a plan moving forward and I will write you a full lesson wrap up later, but for now, I hope you're enjoying my deer leaps just as much as I am.

Or possibly more, since you just get to laugh at the evidence instead of riding through it. ;-) It's a thrill, that's for sure. Happy weekend!
Posted by SprinklerBandit at 9:34 AM