Shadows of the Past

I guess it's been kind of a long time now, but if you've been hanging out here long enough, you remember the big red horse that made me, my Cuna Matata. Compared to him, I've always thought of Courage as small, short coupled, flexible, and squirrelly.

But the other morning, I got a chance to sit on the mare I grew up riding, and realisitically, the one that introduced me to OTTBs. She's probably the reason I always go for the short-coupled, hot thing.

She's 23 now, but she's still an old bat, just like she always was. She's 15.2, short-necked,. short-coupled, and so balanced. I had a fun ride on her. She still has a ton of buttons (that I put on, back in the day) and she still is a hopeless curl-er who will never take a real contact.

At her age, you just learn to roll with it.

And then I hopped on Courage and tried to put a dressage ride together.

After spending a week jumping and hacking, Courage was as stiff and disinterested in dressage as I have ever seen him. His neck felt long, my reins were heavy, and impulsion wasn't happening. He wasn't bad. He just wasn't going to play.

It felt strongly reminiscent of my old red man. Like, eerily so. I think part of it was just the contrast with the ol' bat (because she is THAT SHORT).

There were some near-disastrous machinations by another horse while I was up, and I literally had to kick Courage into a trot to get out of the way off a loose horse careening towards us. 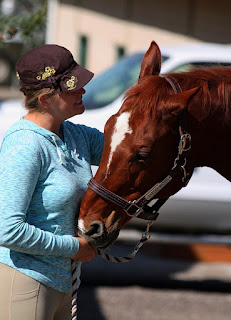 I never had to pick up the reins.

Because that's the kind of horse he is. I know this is weird to some of you, but I've always thought that Courage came to me for a very specific reason. He is his own horse and he's not ever going to be Cuna, but every once in a while, he reminds me of the red fellow so strongly.

That's when I know this is right.
Posted by SprinklerBandit at 7:00 AM