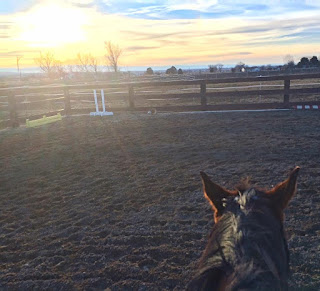 Courage is a sensitive and complicated horse. I say that not to excuse his "bad" behavior, but to explain my training technique, if only to myself. I have been raised under good horse trainers and I appreciate the theory of what they do, most of the time.

Because horses are individuals and because sensitive, complicated horses are a world unto themselves, pretty much every gold standard for training has at least seven caveats when applied to my specific horse. And it's hard for me to admit that, because like or not, pretty much everyone who's anyone at training horses likes to take it upon themselves to explain to me why I am Wrong and Bad and what I am doing will Ruin My Horse.
And I know that my horse is my problem and I need to just let their opinions roll off and I know that despite whatever gospel most of them spew, once they were seated on my horse, they'd all pretty much do the same thing I'm doing, because it's the only bloody thing that works.

Bear in my that my absolute favorite quote about horse training is this: "Any behavior a horse offers is just information about how he feels. The only thing that makes that information good, bad, or indifferent is the importance we put on it."--Mark Rashid.
In our 2.5 years together, Courage and I have worked with... four? No, I think five six different trainers. Each of them provided something different at a different time, but the one who has done the most in terms of really unlocking Courage's potential and putting us on a good path together is our current dressage trainer. She is a relentlessly kind and patient person and she has done wonders for Courage and I.

On our first hard schooling ride outside the other day, Courage and I were once again flailing and leaping across the arena. (Because trotting and changing bend. Omg.) And instead of just responding to it, I found myself feeling like a failure. I could see these ticker tapes running through my head simultaneously:

1) FORWARD is ALWAYS the ANSWER
2) DON'T LET HIM GET AWAY WITH THAT. YOU'RE TRAINING HIM TO DO IT.
3) MAKE IT UNCOMFORTABLE FOR HIM TO DO THAT.
4) JUST KEEP DOING THE THING THAT SET HIM OFF UNTIL IT'S NOT A BIG DEAL ANYMORE

Right? All of those things are good general training principles. Forward is a great thing. Giving up at critical moments is piss poor horsemanship. Not addressing undesirable behaviors frequently makes them worse. Desensitization is the root of domestication. We can all agree on those things.

Well, all of us except Courage. Who remember, is sensitive, complicated, and outweighs me by a thousand pounds.
So for my specific horse, forward is not only NOT the answer, it's actually usually a terrible idea BECAUSE (hear me out), he knows all about frantic upside down running from the racetrack, and no one needs more of that in their lives. To him, going correctly and pushing more from behind is HARD and STRESSFUL and frequently results in leaving the scene in a mad leap/flail combo. If he's having a hard time with something and I push him forward, he will physically leave. Period. (I do hope that we can eventually change this, but that's where we're at right now).
Items 2 & 3 on the list are highly linked--if your horse takes off flailing and leaping, it's fairly common to just keep kicking on so that he doesn't "get away with it", learns that it is uncomfortable, and that leaping doesn't get him out of work. AND I AGREE IN PRINCIPLE. But. In practice? No. Not with my horse. Again, let's look at his history. This horse was on the track for 6 years. He knows how to do a job. He has a FANTASTIC work ethic. And also, he's good at running. And also running in a panic is a kind of adrenaline surge that COMPLETELY changes what his brain is thinking about. So. Yes. Making him "run it off" or whatever has really only ever escalated the situation in a bad way AND TRUST ME I HAVE TRIED.
And then there's item 4. Desensitizing. Do it more. There's a definite merit to this idea, right? I mean, giant tractors can fly by 2" from Courage's nose and he doesn't even blink. The horse really isn't spooky. But. (See? All the caveats!) Think about that training quote for a minute. Courage flailing is Courage giving me information about how Courage feels. If how he feels is stressed out, overwhelmed, and trapped, how does me making him MORE stressed out, MORE overwhelmed, and MORE trapped make the situation any better or build his trust in me?

That's more along the lines of "hey depressed people have you tried NOT BEING DEPRESSED? NO? WELL LET ME MAKE YOUR LIVES MORE SHITTY SO YOU APPRECIATE HOW RELATIVELY LESS SHITTY THEY WERE BEFORE".

Right? Like it might sort of work, but the person doing it is definitely an asshole and you don't ever want to see them again.

So back to Courage. He flailed and leaped extravagantly across the (very large) outdoor arena. I got him pulled up with the help of the fence. Instead of kicking him forward and making him rodeo it out or jamming him back to trot and trying to provoke him to flail again, I calmly turned him around, walked off, and repeated what we were doing but at a slower gait. Over and over and over, to show him that he could do it. I rewarded him for trying, and he rewarded me by trying harder. 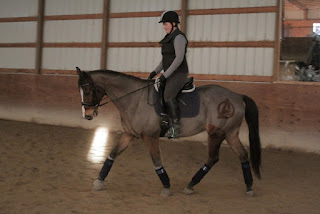 And then we trotted a small circle and trotted down the long side each direction, did a downward transition, and called it a day. It was the best quality trot I've had all year. I didn't re-address changing the bend at the trot. I didn't get after him for flailing. I didn't move on and push for more.

I'm not the be-all and end-all of horse trainers and I know that. All I can do is what works for myself and my sensitive, complicated horse. In my world, that means it's so much more productive to take a deep breath, slow things down, and explain again from the beginning.

If he's not getting it, doesn't that reflect more poorly on me as a teacher than on him as a student? 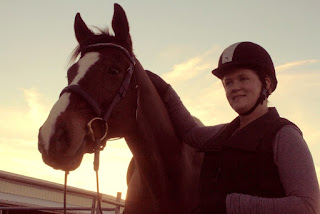