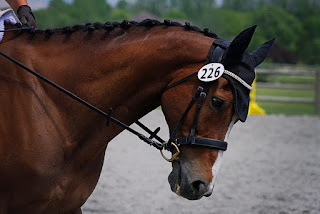 Well. This is it. The year I've been planning for.

And yes, now that I've said that, I fully 100% realize that my life is from here out jinxed.

Last year, Courage and I hit the event derby series and garnered a GIANT year end award, which was a serious bucket list item for me. I'd love to repeat that at crossrails this year, BUT the whole goal of the last year was to get Courage going as a dressage horse and get him exposed to shows

we could show at first level this year.

And get our bronze medal scores.

Double gulp.
SO. Here's what my tentative schedule looks like for now (the local calendar is not yet complete, so some dates are invented.):

(hopefully a schooling show in April--failing that, we will haul somewhere to do a lesson and get him out)

May 7-8 Spring dressage show at OUAH. First 1 and probably first 3. This is a non-recognized outing that will hopefully give us that first level feel. And also hopefully not completely freak us out. I want to do both days and really work on my test riding/show warm up to learn what I need to do for the best results possible.

We will then skip the AMAZING AND EXCITING sounding cool new derby the next weekend because A) I only have so much money and B) I need to not wear Courage out completely because then... KIDDING WE WILL DO IT CUZ I CANT DECIDE

May 21-22 Idaho Dressage Festival! Probably first 1 and 3 as well. This is our big hurrah--USDF recognized and all. Need all the $$$ memberships and I really don't want to know how much this will cost me. I plan to stable on the grounds and hopefully not completely lose my marbles.

Ok once that's over with...

June 11-12 League Dressage show at AEB. Again, probably first 1 and 3 unless we're failing a lot or I feel a burning urge to do 2. This is also run concurrently with an event derby that we could cross enter into. Crossrails? Maybe.

June 17-19 Boise River Dressage at OUAH. I need to do some research here. I'm tempted to do the opportunity classes because they count towards league show year end points, but I'll also have all my memberships and could show recognized. I really need to find out if I don't get my Bronze scores in May if I could try to get them here. I don't know and that would change how I approach this show.
Looks like we'll decompress in July (which is good because the summer doldrums are real), then head on into August:

August 6-7 League dressage show in Filer. Again, this depends. It's a 2+ hour drive and if I haven't done the other league shows, it's probably not worth it. On the other hand, any chance at year-end swag sounds good to me. We'll see where I'm at and how broke I am.

September: There's a cheaper-but-crazy jumper show on the 10th or a spendier-but-nice jumper show on the 24th. If Courage is jumping well and I'm feeling up to it, we might hit one of these. I really like the timing here--we'll have had all summer to get going and see if jumping is something we can do well this year or not.

October 1-2 Fall league dressage show at AEB. First level tests. This is being run concurrently with the derby series we did last year, which makes me think about cross entering. We will see, but it's unlikely my budget will support chasing two different year end awards in two different sports. Maybe. Maybe. I do love swag.
Haha the more I write, the more I want to try and do the derbies too. I really can't justify the one in May--it's right before our big big show and I don't want Courage to be tired headed in to that.

Or do I? I DON'T KNOW. Obviously, this whole thing is flexible. A lot of my scheduling is going to depend on getting more answers as to how the league shows work and how the bronze scores go and if I think I have a shot at a local year end award at first level recognized (lol a girl can dream) or if the league is really where it's at for us this year.

So. I will figure out memberships and awards and STUFF and try to get this firmed up. GAH NOW SO NERVOUS.

And just because I need to put this out there: Courage and I had incredible success at intro and training level last year. I realize that doesn't/isn't/won't translate straight across to kicking all the ass at first level this year, especially as we try to move up in terms of both level and quality of competition. All my talk about year end awards is just because winning one was SO MUCH FUN and I'd never done it before and it would be mind-blowingly-amazing to pull off a repeat.

Doesn't mean I think we're in contention. Not even close.