This One Time, I Jumped My Horse

If you've been around here long enough, you probably remember how I desperately wanted Courage to be a jumper. 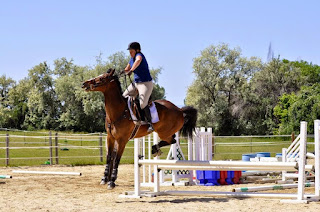 Needless to say, we gave that up.

I do try to pop over jumps from time to time, but last time I tried that, it was the definition of a shit show and set our training back several weeks. I just dropped it. Courage can jump and is pretty honest, but he DOESN'T want to be a jumper and he's been VERY clear about that.

But then Lindsey got a fancy new French monoflap jump saddle and I just HAD to get some butt time with that thing.
It's too small for me and the flap is all wrong, but OMG you guys I've always said a monoflap was my dream jump saddle and now I've sat in one and it really, really is.

I felt so balanced and secure and happy. It was amazing. I really focused on keeping Courage loose through his topline because his default over fences is to get jammed up and pissed off, and well...
His first jump is always exuberant and this was no exception, but look! That's not terrible.

We played with the tiny crossrail until he got a little bored.


I felt so great. Confident. Happy. Not a single twinge of nerves. So much of riding this horse is mental and wow it is huge to be able to ride through things without him trying to check out on me.

I even asked Lindsey to raise the jump and I got this:
French saddles are magic, people. It's a good thing I already sold my soul for the Precious because that means I can't buy my own but if you see me on a street corner, think nothing of it and just keep driving. We have no plans to be jumpers at this point, but it was fun to mix it up and omg SADDLE.

As JenS pointed out (it's not fair when tiny pony people who do dressage also have the same name, but I digress JenJ), all the dressage is starting to pay off for Courage over fences. He's finally learned to give through his topline and gained a lot of strength and flexibility, where he used to reply on sheer athleticism and attitude.

He's still not going to be a jumper, but as someone who enjoys dabbling in lots of things, I love the opportunity to actually enjoy myself over jumps.
Posted by SprinklerBandit at 7:00 AM