Courage has been in my life for more than three years now. I blogged before about how that's the longest I've ever had a horse and he and I are definitely still sorting out our relationship. But if you've read this blog, I venture that you've picked up on the rather-dramatic quality our partnership has entailed.
Just in the last six months, something has finally clicked for us. He's finally become the one my dreams are made on and the one I can't wait to see.

And now, something weird has started happening to me.
I rarely dream at night and if I do, I don't remember it. The only real exception was with Cuna, the horse who had a profound and ongoing impact on my adult life. After I had to put my old man down, I had vivid nightmares for weeks about him. Horrible things. They're still in my head years later.

But lately, things with Courage have been good. Almost magical. He and I are in this comfortable place where we know what to expect one another and we trust each other.

It's not the relationship I had with Cuna because Courage isn't Cuna, but it's a new and beautiful thing. I've always said that Cuna brought Courage to me, and I've meant it on multiple levels, some cornier than others. I'm in a rough patch in life right now, but Courage is my constant. My steady eddy, as weird as that sounds.

Whether we work or toodle or lunge or just hang out, he brings a sense of peace to my life. More days than I'm ok with, I just look at his picture on my phone and don't even make it to the barn.
Then it happened once. Then again. 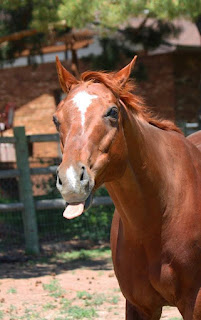 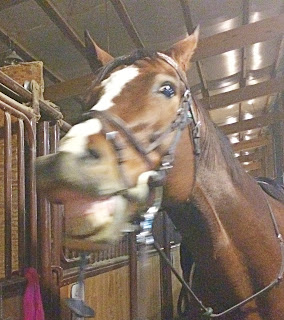 I know it's not real, but I wake up with a strangely serendipitous feeling that everything is alright.

That which was meant to be, is.
Posted by SprinklerBandit at 9:49 AM