I somehow went from  the "lessons once a quarter or so" schedule to the "four lessons in six days" schedule.

I am ok with that.

It started last Thursday--that's usually a trainer ride day, but I'd missed my usual lesson Tuesday and our trainer was able to squeeze us in, so a lesson it was.
I was thrilled with C. Thrilled. Omg. It was like sitting on a dressage horse. He was loose and forward and OMG rideable and I actually got to work on me. Guess what? When he lets me ride, my position actually doesn't suck that bad.

We had about 90% of a REALLY good ride and then we went to do right lead canter and Courage had kind of a giant existential crisis about how hard it was mentally which resulted in a giant flail and the only thing between me and a concussion-while-mounted was my beloved standing martingale.

We finished with a nice little relaxed trot on a loose rein and I couldn't wipe the smile off my face. I had a peek at the sort of horse Courage is capable of being and omg it's going to be fun. Someday. Haha.

We had a nice toodle on Friday, found out about a last minute dressage clinic with our favorite clinician from last year, and slipped in for Sat/Sun rides.

There isn't really any media from Saturday beyond my proof-of-outfit shot. We worked on a persistent head twist that Courage has. It's usually subtle, but it always stymies me. Our trainer was able to get rid of it on ride #1, but it kind of comes and goes for me and I'd like to stop getting test comments like "every time he twists his head, a puppy dies" from dressage judges.

The clinician called it out as an imbalance and gave me a bunch of tools to work through it with. The biggest problem was that I had to address like 7 things at once and my brain wasn't thinking that fast. I also warned her that we could be explosive when cantering, so she had us canter both ways and HOT DAMN C-Rage kept his brain in his head and was lovely.

I think my best takeaway from this day was simply that when Courage is with me mentally and rideable, I need to actually ride him. Whether or not he is rideable can be hit and miss, but I need to take advantage of the good days.

Then came day two!! Not only did my trainer take (extensive) video for me, but Alyssa came out and nabbed some great pictures. That is no easy task when you're basically trotting 20m circles over and over, so full credit to her.
We took all the concepts I learned on day one in terms of getting Courage to rebalance without the head tilt and put them together at speed. And by speed, I mean slow trotting. It's hard, ok?

I had to ask Courage to keep his neck low and long. The neck is a counter balance, so I'd take the neck one way in order to tip the body the other way. If he was stuck, we had to go on a small (5-10m) circle to diagnose what was holding while riding forward and engaging the hind end. Oh and if I did all the right things and he still didn't release, that meant I was holding in my body. So. Apparently I do that a lot.

I can't seem to make it sound as hard as it was in the moment. Rest assured, it was super hard. Courage was also super good and stayed with me the whole time.

At this point you're probably like "where is lesson #4" and "wtf you said there was video of clinic day #2" to which I say "lesson #4 is tomorrow I think" and "it's not edited yet ok". 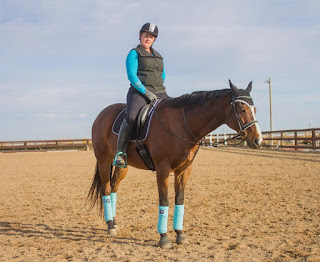 This is the year Courage needed. To this point, he has more or less gone through the motions, but now he's starting to really understand them. The rides I've had the past few days are rides I could not have had last year, last month, or even last week. He's mentally with me and he's ready to go on.

And as much as I love satin, I love this feeling more.

PS hopefully satin next year. finger crossed.
Posted by SprinklerBandit at 9:14 AM