(definitely) Not Meant To Be

I got Courage three years ago with the idea that he would be my jumper. Maybe hunter. We could do hunter derbies if I was REALLY lucky. 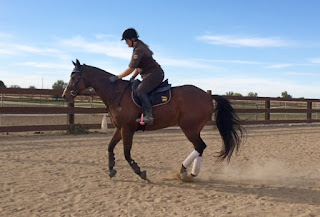 In a move that surprises no one familiar with my luck (I have none, ever), that plan didn't pan out. Courage has firmly opted out of any sort of career over obstacles on many occasions. He's a dressage horse now and I'm like oh, 80ish% fine with that. Except every once in a while I either go "OMG MISS JUMPING WAH MUST JUMP" or "OMFG DRESSAGE TOO HARD WILL QUIT AND BE JUMPERS". 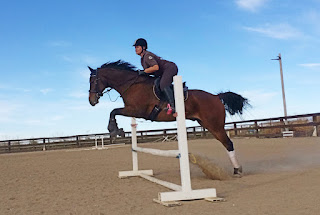 That has happened three times this year. The first time was a massive shit show that's best described as "if you want to do something really stupid, at least remember to put your freaking martingale on, dumbass" and the second time was actually pretty great.

The third time was last week. It's possible that I had sort of convinced myself that now we were doing reasonably ok-ish dressage that everything would MAGICALLY click into place and C would be completely perfect and we'd be like "lulz y u waste time on dressazzz when could be world's most perfect hunter move over brunello".

I mean, I won't swear that's how it was in my head, but you know. It may have been rattling around back there. Because obviously a little first level dressage is all it takes to turn an anti-jumping OTTB into a six-figure warmblood with 1.5 decades of top level training. Obviously.

I'll pause to let your eyes recover from the stain of that collective roll. It's ok. I could hear it from here.

Anyways. Lindsey brought her magical French saddle out and played jump crew for the day. Now that I don't try to make her ride the beastie, she's actually way more willing to do that. Interesting. It started out great--we walked and trotted over poles and I just focused on keeping his topline loose and his brain engaged. He jumped cute both ways when we put up a tiny crossrail. 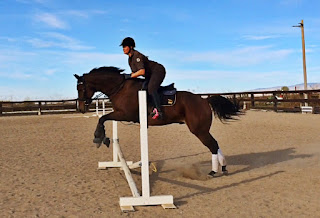 Then we did a wee little vertical and again, FABULOUS. Thrilled. So easy. Life happy. Perfect hunter. Daydreams.

And then we changed directions. Courage sucked behind my leg and got tense. I rode a couple circles and asked for some relaxation. It seemed sort of better so we trotted up to our tiny vertical, made a gorgeous jump over it...

Hard enough that Lindsey completely missed the video because she had serious (if unfounded) concerns for my physical safety. I apologize for the lack of fail-related media. Alas, it (like my horse) was out of my control.

And lest you think I was abusively jumping the legs off an unfit horse, we had trotted in/cantered out over a teeny crossrail and vertical about 10 times. Total.

Sigh.
Rest assured, I am in no rush to run out and purchase my own magical French saddle. And I guess, I do appreciate Courage's commitment to his cause and willingness to be upfront about his life goals. He's happy as a dressage horse and he's willing to play jumpies maybe once a quarter, but he definitely didn't want me getting any ideas about an alternate career trajectory.

I even compiled a fails video to remind myself of this fact.

So yeah. We dropped everything down to ground poles and slowly worked back up to our tiny vertical and ended on a good note and I actually don't think I broke the steering or the brakes this time, so that's cool.
But when people ask me why I don't jump and why a certain bay someone always goes in a non-dressage-legal standing martingale, well, that's why.
Posted by SprinklerBandit at 7:00 AM