In Defense of Gadgets (or "Yes, Those Were Draw Reins You Saw")

I hate gadgets the way a rich, white Trump supporter hates welfare recipients--you know, theoretically but with very little personal experience to apply because I don't use them or hang out with people who do.

And now I have Courage. He's a thinking rider's horse. The "normal" stuff doesn't work for him, but walking the road less traveled can have spectacular results. I would never, ever intentionally take two months off riding. I would never have purchased a weird-ass lunging contraption (or two!). I would never, ever think I'd be riding my horse in draw reins.

And here I am.
In draw reins.

I've skirted around this issue, taken them off for pictures, and intentionally not said anything, because I'm 100% pro-horsemanship and 110% anti-shortcut, anti-gadget, and anti-training-your-horse-by-polling-ottb-connect-because-you're-too-stupid/vain/shortsighted-to-work-with-a-trainer. 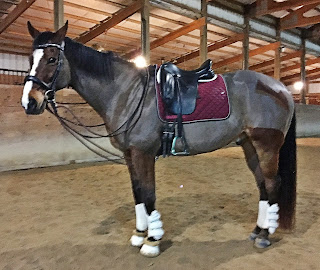 Draw reins have been with us for a very long time and while abominable excuses for horsemanship have too, those fads tend to come and go. Anyone used a bearing rein recently? No? Didn't think so. Those kinda went out in the Black Beauty era. I stand corrected. Apparently they're still a thing. Carry on.

Honestly, even talking about draw reins makes me throw up in my mouth a little bit--the potential for misuse or abuse is huge. The idea that someone could read this post and think "wow, she mocked my strategy of polling OTTB Connect for training ideas but then said something about draw reins so I'll get some" and would then run out and buy a set to throw on their woefully under-educated horse makes me physically ill.

So don't do that. I will publicly and privately eviscerate you. Consider that fair warning. 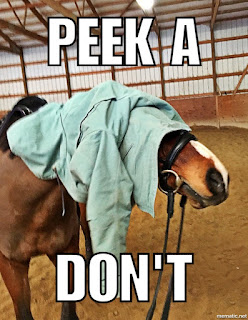 But I'm not dealing with your under-trained horse and under-educated riding. I'm dealing with my horse who has years of solid, thoughtful, educated training under his belt and yet still struggles with certain mechanics of how his body works. I'm working under the auspices of a professional trainer, who to my knowledge does not even own a set of draws and whom I have never seen use a gadget of any kind on any horse.

I'm talking about a long standing issue that I've addressed in every way under the sun with multiple professional trainers and none of them could touch it. I've spent years building Courage's trust and education to this point. I've spent months lunging him under saddle in what is basically fixed draw reins.

And in those months, I have seen Courage go from this:

I'm not talking about a quick fix here. Not at all. Courage was scoring around the 70s at training level at recognized shows. He hacks out. He toodles. He jumps (a little) and he's been in professional training for the better part of a year now. He was just not getting it in terms how how to use his body to push and go forward, especially in trot/canter transitions and especially as we asked him to move into first/second level work. We did lessons and pro rides and body work and talked to vets and covered all our bases there. 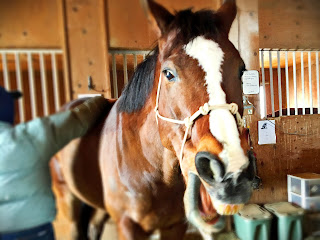 And then I quit riding and added the vienna reins lunging. It took months. Not a joke. Not an an exaggeration. I don't mean months of ripping around in mindless circles, either. Months of thoughtful, horse-first training in which I found different ways to present the information and explain to Courage what I wanted without ever getting angry and always being quick to reward the slightest try on his part.

And now, I have a horse who probably 75% of the time on the lunge line, can give me a correct, balanced trot/canter transition in a calm manner. That's HUGE for us.

But now it's time to start back under saddle. I'm physically compromised and Courage is learning to transfer the information he's gleaned, but he's not confirmed and he can't be until he also understands with a rider. 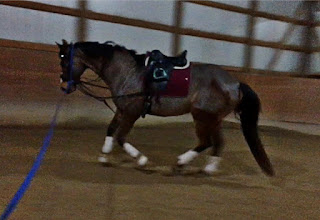 I need the same effect that I get from the Vienna Reins, but I need it in a format that's safe to ride in. I need something I can release, but something that continues to explain to Courage that the balance he found on the lunge line is a balance he can use under saddle.

Draw reins it is. 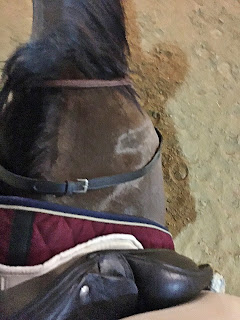 They are a gadget. They are so easy to abuse. You can wreck a horse permanently SO FAST. Ever seen a panicked runaway with it's nose on it's chest and that horrible look of pain and fear in it's eyes? Even if you have a tolerant saint of a horse, you can create so much distress, as Lauren pointed out. You can make that. You don't want to. It's flat out cruel.

Draw reins are not something I pick up lightly and they are something that will go away as soon as is reasonably practicable. I've introduced them very slowly. Lots of walking and toodling and just letting him feel them without having them do anything. 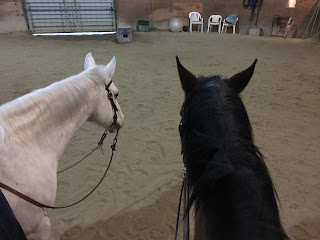 Now we've added in trotting and he's going well. So well. Not gonna lie, he feels like a whole new horse. He's learning to give me the base of his neck, which is what I need to go forward from here. 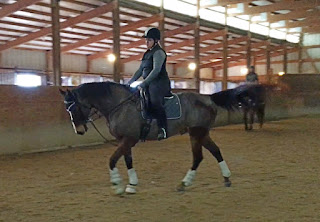 Even with all the training Courage has had and the education we both have, using draw reins pretty well freaks me out. I don't need him hyperflexed. I don't want him behind the bit or dumped on his forehand or any number of other Very Bad Things that come from a device that give me this massive amount of leverage over a flighty prey animal.
These are a tool to explain to him that he can use his body a certain way and nothing more. They only work because he already understands contact and rhythm and has the basics installed to give him a frame of reference for what I want. Just like with the lunging, they have to be presented in a calm, horse-friendly manner and the only way he learns is if every single step makes sense to him. No rushing. No pushing. Once he understands what I'm looking for, the tool will go away and I don't anticipate bringing it back out.

And that's where it's at. 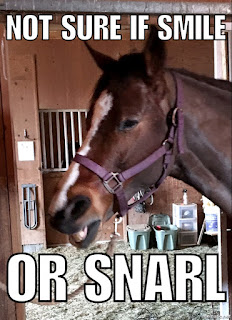 Theoretically, I hate gadgets. In practice, I'm using one and I'm very pleased with the results. That doesn't mean I recommend them and frankly, if you think they'll work for you, I think you're an idiot who needs a trainer and dear god please don't ruin your horse. Please.
Posted by SprinklerBandit at 7:00 AM