AND THEN WHAT HAPPENED 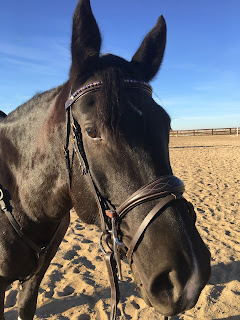 I've probably mentioned this, but in case you do something with your life other than obsess over my Zoebird, here's the background:

She's four. She spent six months last year being a driving horse, which is fantastic in terms of being low-impact while engaging her brain and showing her the world. However, as a baby driving horse, she was asked not to canter. And as a baby draft horse, cantering on her own wasn't a high priority.

When she came home in July, we had lots and lots to tackle and one of those things was learning to canter. We started in the round pen. She could only do a few strides at a time. It was not coordinated.

When she got more coordinated, we moved to the big arena!
First I was just thrilled if she got a canter. Didn't matter if it was crossfiring, wrong lead, whatever.

Then over the course of a few weeks, I upped my expectations to a WHOLE HALF CIRCLE and she had to do it EACH DIRECTION.

As she got more comfortable, I upped the distance until she was doing 2-3 upward canter transitions each direction for a total 2.5 circles each way at the canter.

All that was on the lunge line.

Hence, we've been backing off the lunging but I want her to keep cantering and improving and building strength and muscle memory.

Prolly it's time to try that shit under saddle.
Soooooo. I seriously considered farming out the cantering process.

But I have to do it eventually, and after several months of watching a Zoebird canter on a lunge line, I knew she wasn't going to be naughty.

Last week, I was trotting around. I thought canter might be a good idea, so I asked Zoe to go. She went OH HAI BIG TROT and I was like HO SHIT DEATH NOPE. Plus we didn't have a media person, so even success would have been undocumented, which is clearly the most important issue.
But earlier this week, I was having a real nice ride. We'd done transitions and figure eights and Zoe was being a super lady.

We got big trot, but instead of panicking, I giggled.

And then I thought about farming out the process again.

And then I thought let's do this thing.


If you're a video hater, here's the relevant still:
You can't really see it from this angle, but I have a stupid grin on my face because Zoe is so fun. You can see in the video that she sort of four beats and then is like SMOOSH GOES WOOSH (credit to AA with RA for my new slogan).

It's cute. It's fun. It's SUPER to ride.
I should probably have a cooler wrap-up than, "it was real fun and I can't wait to do it some more", but that's where it's at.

The wonder baby.
Posted by SprinklerBandit at 7:00 AM