Zoëbird Goes to a Clinic

I signed Zoë up for her first-ever fancy dressage clinic for last weekend. I mean. The mare is W/T/barely C so it seemed a bit preemptive to be like "yeah totes I'll pay $$$ to have someone tell me she's not broke", but I'm really, Really, REALLY picky about instructors I'll ride with and I wanted to support the clinician coming in. (Background: last time she came, a friend who has a hot, sensitive off-breed horse rode with her and the clinician went through stuff it took me MONTHS to work out on my own with C in about 30 seconds. WUT TAKE MY MONEY.)

Anyways. I went to audit/check out the route and parking conditions on Friday and watched lovely riders on lovely horses have lovely rides and while I still liked the clinician, I was kinda like, "What am I doing here?"

I mean. As much I as love my smooshy mare, a finished dressage horse she is not. We like toodling and adventures. We aren't super cool and good at stuff.

The organizer kindly offered to let me come a couple hours early so Zoë could hang out and acclimate before our ride.

I need to start getting used to this, but Zoë was so low-drama that it was absurd. She's all O HAI EVERYONE IM ZB and that's that. Literally put her in the stall with hay and didn't hear a peep out of her.

It was the first off-property "work" outing for both of us and one of us was definitely having some OTTB PTSD (me) and so got ready plenty early just in case there was shit to be lost (also me).

Zoë was all "O HAI CHICKENS IM ZB" and "O HAI HORSES" and that was pretty much it. I did put her on the lunge line and then I saw ZOEWILD.

She cantered TWO CIRCLES with her tail up.

Then was am "AM TIRED WALKIN NOW".

Time to go! I hopped on and was having an almost out of body experience like OMFG AM I DEAD BUZZING AHHHH and Zoë was like "Y R THIS EXCITING WE R WALKIN".

The instructor had us doing some interesting stuff:

1) Diamond shape - circles, especially on babies, kinda get all over the place and aren't super useful. Instead she set out 4 markers and had us make a diamond shape around them. This made me be very honest about where we were and where I was placing her feet. Leaning in/out was super obvious and the straight lines between the markers were telling.

2) Following her nose - Zoë isn't trained/balanced enough to really understand moving off my leg to correct straightness issues at this point, so instead, I had to keep Zoe's body in line with her nose all the time. If we leaned in, then point her nose out and steer out. Or the reverse. The diamond shape was helpful for this. If you're bulldozing cones, you're leaning in. FYI. 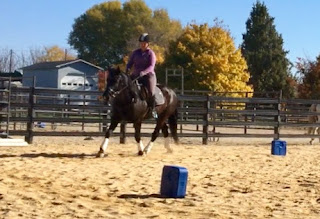 3) Shoulders up - At this point in her development, ZB is a bit downhill and pulls herself around with her shoulders. To help her overcome this, it is critical to keep her poll the highest point. If I ask her to stretch down at this point, she'll just trip over her own head (it's... happened) and run downhill. The stretch will come after she learns to lift the base of her neck. For now, head up. 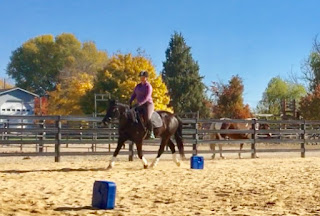 4) Giving - at the halt ONLY because of aforementioned tripping-over-own-head issue, we did a cool exercise where I'd ask Zoë to halt, then hold one rein steady and give the other forward. This isn't a seesaw on the mouth thing or whatever--just give one rein and wait for her to soften. If she went backwards, I'd ask her to step up and halt again because we never pull or go backwards onto the bit. If she lost ambition, I would "fluff" her with my leg but not have her step forward. Once she gave on one rein, we'd switch to the other. 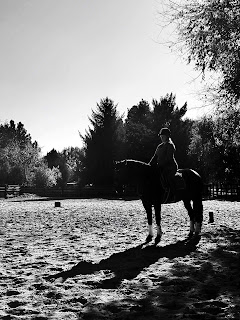 5) Forward - I love toodling and it showed. "Walk to the rhythm of the trot" was something I head a lot. Also MARCH and ONETWOTHREEFOUR. At this point, I need to be very concerned with rhythm for Zoe and that rhythm needs to be CONSISTENT and GOING FORWARD. --This one is kind of funny for me because I have so much baggage with C that I had some anxiety about really moving out. In the context of this lesson though, I got tools to manage the forward (HANDS UP REINS SHORT) and it all felt really comfortable. 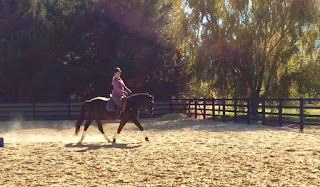 6) Half Stop - at a more polished stage, it would be a half halt. At this point, we want Zoë with me and listening to me so when it feels like she's lost her balance forward or is pulling down on the reins, ask her to stop and then the moment I feel her slow down, go on again. This was tricky for me, because again, I'm used to hot horses so I kept asking for a BIG stop and she'd stop. And then we were stopped. Ooops. I definitely need to get more sensitive and release AS SOON AS she gives vs getting too excited about whoa. 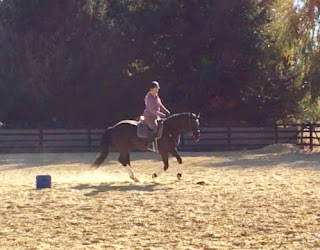 7) GoStopGO - Clinician had us canter left HANDS UP GOING FORWARD and it actually felt really good. Then she's like CANTER RIGHT and I definitely did not tell her we'd never cantered right before. Zoë gave the same effort she's given at home--plowing forward at the trot and almost falling down, but not quite cantering. Clinician wanted her quicker off the leg with her hind end going quicker. Aka. Make her hotter. This is something I DEFINITELY would NOT have done on my own because again, OTTB PTSD. But instead, we did a series of very crisp, prompt W/T/W/T/W and revved the engine, creating a desire to go forward. Then we attempted to go W/T/C in about 5 strides and if she didn't get it right away, came back and revved the engine a little more. It took a little bit (mostly for me to accept that this wasn't a scary idea) and then BAM canter right. What's more, with the front end lifted and the forward moving thing, it was actually a super fun canter to ride.
After the first canter right, we did the giving exercise again. Zoë had a full-blown Zoëmeltdown.

Which is to say.

She stood there and flipped her head for a while. And then she was like FINE and stopped.

When we finished, we were both completely exhausted but Zoë had a big, soft learning eye and my little mind was blown. It was so good to push ourselves a little and find out what we were capable of and working towards. I needed someone to a little bit hold my hand and a little bit kick my butt to move us forward. Plus, Zoë is just such a different horse from anything I've ever had--it was so good to get more input on how to ride her more effectively. 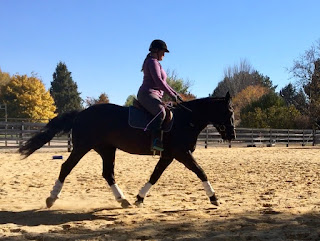 And because I am just so proud of my baby mare, here are things the clinician said about her:
Oh, she's really smart.
She's going to be so easy to get on the bit.
She moves forward so nicely!
She is going to be a really fun one.

It was a great experience for both of us and I'm excited to do our homework to get ready for next time.