The last month I owned Courage, I went on a western kick and bought a bridle and a saddle. The saddle of course fit ZB somewhat like a banana boat on the top of a hill.
So obviously that was never going to work.

The bridle. Omg. I was super duper in love with it and I'd LITERALLY JUST BOUGHT IT and the advantage to living where I do is that custom western stuff is super accessible.

I took this bridle to a shop that's like a mile from my house: 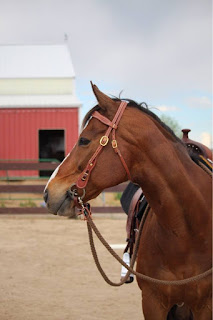 The other day, I walked into the tack room and was greeted by this glorious sight:
I tracked down the owner, got permission to play with the saddle, and. Well.
See, once you have the set up all ready, it's time to get on and ride.
Here's a wee secret about me: I am completely terrible at riding western.

It's never been a part of my daily life. I super admire those people who just effortlessly sit there and flow with the horse and look like they were born in a stock saddle, but those people are so not me. I'm an obsessive detail person who is like HOW DO I WESTERN

The best feedback I've gotten was this:

"Whatever the hell that is."

NOW ITS ON VIDEO.

I think it's best described as some sort of hunter perch with my hands singing a discordant duet of FALLING FREE FALLING. Who knows. Props to ZB for being a major sport and just letting me do whatever the hell that is.

Maybe I'll figure it out. Maybe I won't. 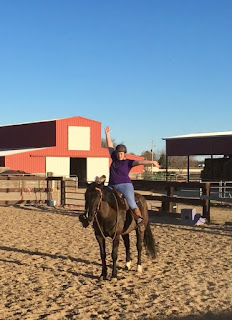 The important takeaways are these:

1) ZB is stinking cute as a western pony.

3) CHECK OUT WHO IS BOSS AT DITCHES