Haha. I call him "the light at the end of the tunnel".
Cuna, post lesson today.
Despite my only missing a single blogging day, we have a lot to catch up on! I have had two (count 'em) jumping lessons on the big red man. 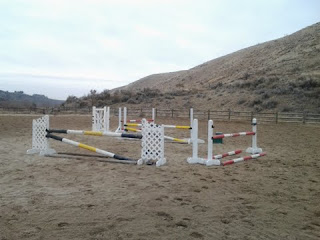 Here was day one. Two single verticals and a one stride. The goal was to work on waiting with your position for your horse while remembering a small course.
It was my first time to actually jumping Cuna over anything more than 12" tall, so it was kind of an adventure. The awesome thing about Cuna is that he actually knows his job, so I would put him on a line and sit there and he would take me to the fence. So cool. I could trust him to go, so we could come in long or short or just right, and he'd take care of himself as long as I stayed out of the way.
Oh, also--old man can buck. I grabbed his face over one jump accidentally and he had a head-flipping, bucking fit about it. Right. Do not grab face. Grab mane instead.
He's a super balanced sort of guy, so we could really crank around the turns (which was NOT the goal of the exercise, but did happen a couple times). All in all, it was educational and get this, fun.
Yes, I just said a jumping lesson was fun. The only unfun part was that my lesson buddy is working like a maniac on fitness so we did jumping position at all three gaits for like 10 minutes. I can barely walk today.
DAY TWO 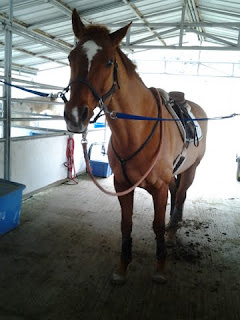 Here we go! I had a couple hours notice that I would have another lesson today. About 30 minutes after finding that out, I thought "Huh. This is the point where I should be mind-numbingly afraid and just want to die."
But I didn't. I can't quite say I was looking forward to it, but I wasn't afraid of it.
I came better equipped this time--I put on my brand new spurs of my very own (they have rolly balls. be jealous) and a better fitting bit on poor Mr. Cuna.
We had a good warm up with a new lesson buddy, then got ready for what is fondly known as "the circle of death". I drew a paint diagram for those of you who aren't familiar with it. 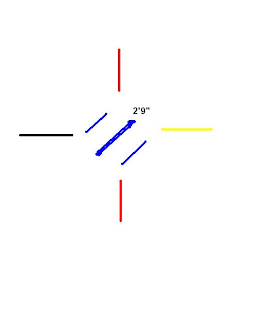 Four verticals set six comfortable strides apart. It can be five long, nasty, sprawling strides, or even seven or eight pogo-sticky strides.
Each of us took a turn. Pick up a canter. Start your course. Jump! Land-one, two, three, four, five, six, jump! Land-
And so on. We had to make a circle with six strides between each fence with the four outside jumps set as 2'6"ish verticals.
Cuna is super mobile and super straight. Also he jumps. Hence, I have no idea why y'all think this is so hard. :p
I'm kidding. It was challenging, but we made it through.
Then it got hard. You see the blue fence in the middle with the blue groundlines? The new course was Top red, Yellow, Bottom red, around black jump, over blue jump, left to Top red, Black, Bottom red.
Whoa.
Those are not easy turns, even on a straight, jumping kind of horse. Oh, and the center vertical? That is taller than I have jumped in a really, really long time. My mind pretty much just exploded, and I was supposed to go first. I told myself that Cuna was just fine at this height and I aimed for the top red. Boom, boom, boom. Got the three. We careened around the black fence, but I got my eye on the line for the vertical and never even noticed how tall it was. Boom. Flying change and left now! Boom, boom, boom.
It was engaging, but I didn't feel terrified or overfaced. Stephanie put the jumps up a bit for our lesson buddy so they were 2'9"ish all around. I felt a twinge of nervousness wondering if we were going to do that, but then I remembered: hey. I just jumped this whole thing without freaking out. What's a few more inches on the big guy?
I was a tiny bit relieved when Stephanie told me that the old man had done enough for the day and we didn't end up going over the bigger fences, but it wasn't that knee-knocking relief that it used to be.
A quote keeps floating through my head. It's from "Afraid to Ride" by C.W. Anderson, which was one of my favorite books ever when I was a kid. (Ironically, it's about a chestnut TB.) "A bad horse took her courage away, but a good one can give it back."*
Anyways. It's not that Izzy is so very bad, but Cuna is being very good.
*I almost cried writing that. Weird.
Posted by SprinklerBandit at 2:34 PM