I'm sure you all remember my favorite equine photographer, Ellie. Basically, any time you see a stunningly gorgeous shot of a horse I like on my blog, she took it. She has other skills than just that, though. She's also a top-notch pedigree researcher. How do I know?

It's simple. She and I were both curious about Cuna's background. I gave her a fragment of a name that I knew may or may not have anything to do with his Jockey Club registration.

She ran with it. In a couple of hours, she came back with this:

3) A race report for the race he won.

4) An article about the sad passing of his race trainer, who sounds like she was a wonderful lady.

Then it got even more interesting. After all, we weren't really sure the horse she was researching was my beloved Cuna until we saw this:

This is a picture of a Cuna sibling from his damline.

The big, soft eye? The little stripe? The tiny muzzle? It's totally Cuna.

Ok, officially it's "The Riddler" and he's for sale on dreamhorse. Reading through his description is like reading about Cuna. He's "Not for a beginner rider, but is a very fun ride for a rider with experience." and "an excellent mover with great natural balance, big stride" AND "has been showing at Events and Combined Tests, winning a Novice level event and Training level Combined Test, but would be happier with a career in an arena".

Yeah, pretty much they just described my horse, except it's his brother. Side note: someone buy this horse and GIVE HIM TO ME. I want them all.

As if that wasn't enough, she next found this guy, known to his owners as Irish Lexicon.

Again, look at his face. Same shape, same markings. He's a little straight through the hind end and is that bright, flashy chestnut.

Here's an excerpt of his description: "an OTTB retiring sound and with no track blemishes or vices, super quiet and willing without being hot, laid back attitude but not lazy, very sweet and kind, trail rides on the buckle".

Yep. It's what you think. There are other Cunas out there!

Of course, at this point it was officially speculation despite the fact we were finding horses EXACTLY like him. Another one that stood out was Seattle Blossom. His story has more similarities to Cuna: old horse living in a pasture, loaned out to a friend to "try". One ride later, the friend says, "I'm keeping him forever."

This morning, I talked a friend into helping me check Cuna's tattoo. (Ok, I'd never done it before and I didn't want to hurt him. Lay off.) I took a picture of it, sent it to Ellie, and she got confirmation. Cuna is officially registered as "Acuna" and was born 2/20/95.

2) 2/20... doesn't that sound familiar? Sort of important? It is. On 2/20 of this year, I posted a blog about a lesson I had on Cuna that had taken place a couple of days earlier. A mere two days later, I made the hallmark post "Crossing the Rubicon" in which I decided to sell Izzy.

Yes folks, that means that pretty much on Cuna's birthday, I put my horse up for sale so I could buy the old red man himself. That connection seems almost too perfect. I'm pretty sure that I officially bought Cuna on Izzy's birthday too, but that's another topic for another day. 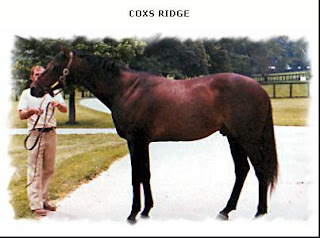 The hunt continues. I'd love to come across some pictures of Exclusive Partner, Cuna's sire or Cabarnet Dawn, his dam. The common thread for the identical siblings seems to be Cox Ridge, his damsire who stamps his offspring with darling faces and sweet personalities. Oddly, that old man was a bay.


The search isn't over yet. There may be baby pictures of Cuna out there somewhere and OMG you know he must have looked like a "giant red bambi" to quote Ellie. Even if I never find them, though, I'm still loving every day with my not-as-old-as-I-thought-he was man.
Posted by SprinklerBandit at 2:36 PM