I know this will shock you all, but I'm going to be honest: as much as I support showing as a way to sift the weirdness and egotism out of equestian sport, I was beginning to question why people did it. It's hard, stressful, and a lot of work. And they pay to participate? That's nuts.


Then Cuna and I went to a little local schooling jumper show today. It's our second ever show together. Nothing fancy, but I thought it would do me good to get out. It was just me and one other of Stephanie's clients, and both of us are pretty independent with totally awesome horses, so it was about as low stress as it's possible for a show to be.

We showed up in plenty of time for me to check in, learn my course, amble around, get the hang of things, etc.

Did I say plenty of time?

The show only had 5 pre-entries (I and my show buddy were 2!), so they thought it would go really fast. A bunch more people showed up day of, which is great for them, but made things take forever.

Thankfully, Cuna is a total champ about standing around until the bugs start bothering him. We alternately stood around (until he got cranky) then trotted to get away from the bugs (until I felt like I was working him too hard).

At last, it was our turn to go in the 2'. Because I'd intentionally avoided all of the "open warm up time" in the show arena (aka kids on ponies slaloming off the horses), I trotted Cuna around the perimeter of the arena and had a quick look around.

I reminded myself to actually ride the first fence, and we were off. I put my leg on, kept my eyes up, counted all my strides, and kept in a steady rhythm.We didn't place because we were too fast for the optimum time, but we jumped clean and I was so proud of us. It was an excellent round.

When we went back in for the 2'3", I took another trot around. The jumps were essentially the same, but now they'd added some flowerpots and tiny trees as filler. Cuna didn't seem overly bothered, so I kept my eyes up and off we went. All was well until the combination at 7 and 8. It's four comfortable strides for Cuna. I know that. I also know I need to package his ginormously long stride to do that.

And of course, I was hot and tired and just rolling along in a happy forward canter until stride three, and then went "shoot! package now!!" which obviously is a stupid idea. He pulled a rail that was totally my fault. 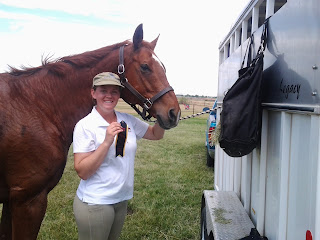 Despite that, we kept it together (and it was probably a small class) and we pulled out a third place finish! Yay Cuna!!!

We were signed up for the 2'6" and 2'9", which felt well within reach, but the way the show was dragging on and my heat addled brain convinced me that it was time to pack it up. I was happy, I was confident, Cuna was jumping awesome, and I needed some cold water and shade.

And so our second show is on the books (/blog). Despite the heat, I had a great time and remembered why it is people do this crazy stuff. With the right horse, it's actually pretty dang fun.
Posted by SprinklerBandit at 4:44 PM