Ok, while the photo contest judges are deliberating, I'm going to do a real, actual Cuna update:

On Tuesday, we bit the bullet and just used dirty tack instead of getting my stuff out. Oh, and by "dirty tack" I do mean Steph's CWD 2G and an Antares bridle. God I love fancy barns.


There was a lesson going on in the arena and they were making use of quite a lot of space, but Cuna and I found a way to jump. A gymnastic was set up, but the jumps were just far enough apart (and Cuna is super awesome), so we'd just take an angle on each jump and canter over the singles.

I stayed balanced, he had a great rhythm going, and other than the one time where I saw a close distance literally a stride away, then did nothing while he took a long spot and got left way behind, it was great. He was great. 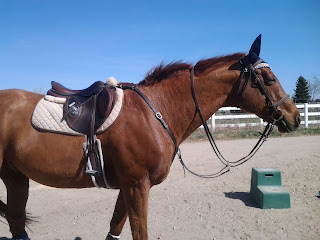 The trouble with riding in the fancy saddle is this: it makes me want one. I know fancy saddles aren't for plebes such as myself. I know that.

I also know that I have to fight my saddle for my position and it was just so refreshing to actually sit in a saddle that let me be in the right place. My leg was stable and I was comfortable. Plus there's the magic 2G tree thing, and if any of you haven't cantered around in these babies, OMG YOU MUST TRY IT.

Or not. Too spendy for me, ever.

Anyways. I'm not sure what to do about the saddle thing. My saddle is lovely, but given my absurd conformation, it puts my leg too far back, so I'm constantly bracing against the stirrups, which hurts my knees. It may be time to explore saddle options. I can't have a 2G, but surely there's something out there that would fit Cuna's monster withers and my shrimp legs with double length femurs.

We'll see. I borrowed his old owner's dressage saddle Wednesday and we did some good ol' fashion dressaging. My sitting trot is coming right along and he's starting to move laterally a little. We're leaving lengthenings alone for now. He likes them WAAAAAY too much. Like, every time we go down the long side, he'll offer them. Gotta love his enthusiasm.

Today we jumped in my saddle. It was ok, but I just didn't feel as solid as Tuesday. I think I'm going to do some research and see if I can't find something that would work better for us. I'm not worried about owning a dressage saddle, but I would like my jump saddle to not hurt me. I would also like it to be affordable and grippy and havana brown and maybe come with matching brown tall boots. Is that really so much to ask for?