I was hoping to have show pictures by now, what with having two different people taking them and a third videoing, but nada. You will just have to imagine it all.

The show morning dawned bright and clear and Cuna and I were on the grounds with our tests memorized by 8.15. Our show buddy rode an hour earlier than we did, so I busted out the brown rubber bands and started braiding. I was afraid that Cuna would have a meltdown over the rather large amount of bugs, but he was happy and quiet.

In order to maximize Happy Cuna, I hung a hay net for him at the trailer and left him alone for the next 30 minutes. He does like his me time.

The real test was when I came back. I know he'll sometimes hold a grudge, and after the trauma of the day before, I wasn't sure how he was going to come out. I speed tacked him, brushed the hay off, and climbed on. We walked to the warm up ring and I picked up the reins.

I was shocked. He was soft, almost bendy. He moved off my legs and didn't hurl his entire bodyweight into my hands. Oh. Wow. Admittedly he wasn't very forward, but I was happy. I didn't want to piss him off, so we walked around for a few minutes before we went in for our test.

He promptly spooked at the judges' booth. I had trouble containing my laughter as we readdressed it. He definitely noticed the atmosphere difference between the show arena and the warm up. Instead of being soft and bendy, he was a bit braced and against my hand. We battled our way down centerline, braced through the corners and decided against stretching at all. Given that training level coefficients are on the free walk and stretchy trot, it was not the best test ever. Regardless, he did most of the movements and we stayed in the arena. I took him back to the trailer and let him chill in the shade with his buddy for 10 minutes.

Then it was time to try again. This time S was able to coach us a bit, since she was done riding. She stressed that I needed to work harder in the warmup so that he could be soft when we went to show. We did lots of changes of bend and direction with transitions and really got both of us moving and in tune.

We were using the full dressage arena for our next test instead of the tiny small arena. Cuna and I trotted around it and waited for the bell to ring. I did some bend/counterbend when he wanted to get stiff and we headed down centerline. The advice S gave us was ringing in my ears, "Don't rush your halt. Get it right, then salute."

So we did. I took my time, had Cuna standing on all four legs, and then saluted. I broke the test into pieces and rode each piece like I would a jump course. Cuna blew me away. He was soft and round. I found myself chanting the mantra S loves. "More leg, MORE CORE, shorten the reins." When we turned up the longside for our free walk on two diagonals, I pushed my hands forward and asked Cuna to stretch. HE DID IT. No bracing, coming above the bit, or otherwise pissing off with me.

At our final halt, I couldn't stop smiling. My horse was soft, bending, and responsive. We had put all the pieces together into a lovely test that I was super proud of.

Both S and Steph congratulated me as I rode out of the arena and I explained to the ring steward about how Cuna was the cutest horse OF ALL TIME. I pulled his tack off, gave him a drink, and let him relax at the trailer.

Despite our very different tests, we scored a 60% on both. We were dinged hard for not stretching well enough, but I'm not terribly concerned. It was really, really good for us right now and that's all I can ask of him.

There's always room for improvement, but I was absolutely thrilled with how Cuna went and how I rode. We have come so far together that it's kind of ridiculous. 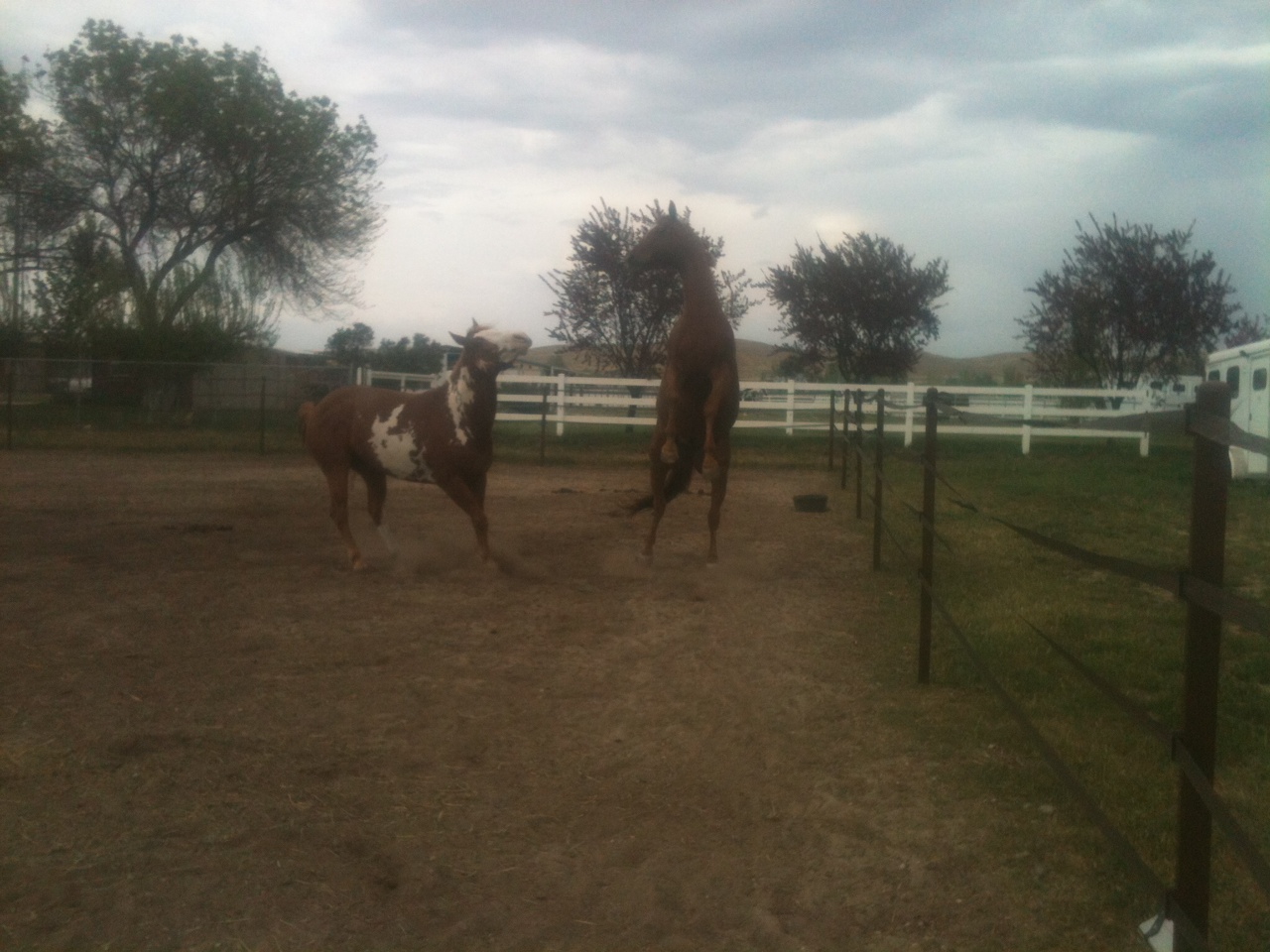 He thought the whole thing was completely asinine. When I turned him out that evening, he galloped around like a wild man and played with his buddy.

No worries--next time we show, there will be jumps.

PS I will post show pictures when I get them.
Posted by SprinklerBandit at 7:02 AM