I haven't written about the old man much lately. He's hanging out in his field, taking his time. He likes his life and trucks around with his buddies. I fuss with his blanket and his feed a little, but mostly I'm just letting him be.

Wednesday, his farrier came out for a trim. I was doing my usual "hold the end of the lead rope so I can watch exactly what he's doing and ask annoying questions". My farrier is used to be my now, so if it bothers him, he doesn't let on too much. As he worked away at Cuna's left front, I pointed to a slightly discolored spot in the sole. "Is that a bad thing?" I asked.

As he trims away the excess toe, he leaves behind a white line like I've never seen it before. It's almost an inch wide with blood in places. "You need to call your vet." As he and later the vet explained, the white line gets wider as the internal structures of the hoof start to pull away from the wall.

No more is it/isn't it flirting with laminitis. We're staring at it. 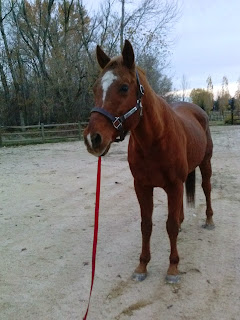 Cuna's been bilaterally uncomfortable up front. The next evening, I took him out to the arena/drylot area at the barn on the lunge line. His walk hasn't looked great to me, but maybe I'm just imagining things.

Nope. The old man was non-trotting.

I patted his nose and told him the vet would be out tomorrow.

And then I pretty much fell apart. He's happy where he's at for the first time in ages. He likes his life. That means a lot to me. I've seen horses live in chronic pain and I absolutely refuse to do that to him. I love him too much to hang on to him when every day hurts.


I got to the barn about a half hour before the vet. Cuna was even more uncomfortable than the day before. I curried and brushed him all over and combed through his mane and tail. I fed him cookies every time he looked at me and just appreciated what a giant red gentleman he is.

As much as I hate to be overly dramatic about emotions and life, I felt like everything inside me crunched when the vet's truck came around the corner.

He was as friendly as could be, and I explained the process Cuna and I are working through, from the weird stuff this spring to the horrid stuff in May to our current situation. He listened, watched, and dug around in Cuna's feet. I didn't have to tell him why the farrier said to call as he poked around at the white line in both fronts and dug an old abscess out of his sole.


We talked about our options. His first thought was to put shoes on Cuna, but the red man and shoes don't stay together long enough for that to make a difference. There's a reason he's barefoot now. Fortunately, that didn't phase him. He moved right along and told me to get Cuna some hoof boots, keep them as clean and dry as possible, put him on bute for the next week to get him more comfortable, and wait.

In his opinion, it looks like Cuna is growing out a lot of the crap we went through in May and we're just still dealing with the residual suck. The event line is pretty obvious on his hoof. He wants Cuna's trimming schedule to be a much shorter cycle, but just said that these things take time and we won't even know how far Cuna's going to come back until at minimum another six months.

We're not in the clear yet. I have to order the boots, since apparently no one stocks size 3s. Not even kidding. The old man horse has big feet.

Cuna hasn't given up and until he does, I'm on board. I've never willingly purchased or used hoof boots in my entire life, but I just ordered some with priority shipping and I can't wait for them to get here.

So... hoof boots anyone? Tell me it's unicorns and rainbows from here on out.

PS I really want to win some cool saddle soap that I can't afford to buy after getting Cuna's hoof boots. Enter Amy's contest for it here!
Posted by SprinklerBandit at 6:30 AM