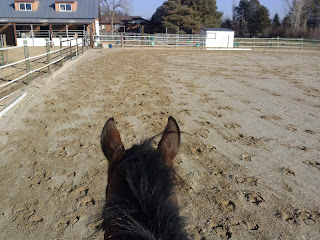 I last rode Courage on Monday afternoon. He gave me some really great work--I kept him forward and bending through his topline, which resulted in some bomb diggity walk/trot transitions.

Then it poured for two days and I clipped him and life happened the next two days. And then it was Saturday and I hadn't ridden in five days and C-RAGE WAS SCHEDULED FOR A REAL LESSON ON SUNDAY.

I mean, redheadlins gives us good butt kickings from time to time, and that's definitely gotten us to where we are today. That said, this is going to be our first time to have fresh eyes on the ground with the same instructor who turned Cuna and I into dressage stars. She hasn't seen me ride since the dressage show in May, so it will be an interesting check on how I'm doing.

That said. I HAD to ride on Saturday. I really did intend to lunge him, given the temperature drop and the clipping and the time off, but I really hate lunging. I decided to just hop on and pop on the lunge line later if he was going to be naughty.

Guess who wore his awesome pants??

I swear this horse trains himself. Yeah, we worked hard (mentally) on Monday, but he hadn't even seen a piece of tack since them.

I warmed him up on the buckle while chatting and laughing and goofing off.

He didn't even fuss about me picking up the reins and putting him on the bit. Omg! Usually he at least fusses the first time to find out if I'm serious. My biggest complaint with his trot work was that it was a little lazy, hence my slightly-less-than-awesome lower leg in this shot.

He's at this phase in his training where he's starting to figure out what I want. We went from having 2 or 3 good trot strides per ride to five or six to half the arena.

And yesterday? Pretty much all his trot work was solid. He's really learning to trust the contact (that I HAVE TO REMEMBER to give him) and go forward while using his back. 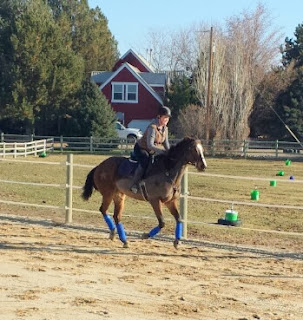 We rolled up into the canter. I sent him forward and back a couple of times on both leads (have I mentioned that I am dying to gallop this horse? DYING). He and I are really starting to figure each other out and it is so fun.

Anyways. After the right lead, I dropped him back into trot by just shifting my seat and he gave me the most forward, balanced, connected trot I have ever ridden on him. It was incredible.

I called it a day. My tack is clean, my horse is ready and I am SUPER PSYCHED for a lesson this afternoon.
Posted by SprinklerBandit at 10:53 AM