A Study in Forward 4: Jumping. Whoops.

After dressage, I stuck Courage in his stall with hay for an hour or so so he could just chill out and I could walk the course. I told myself I was calm, but I was steadily moving into brain-panic-XC mode. Yes, I know they were wee tiny cross rails that we can walk over. I didn't anticipate just how bad taking a green horse XC would kick off the panic function and let all the fear gerbils have a party in my brain.

Clearly, I am the one with the problem.

I pulled him out of his stall and put tack on. I had a whole new (normal) horse. He was all "O HAI PLAYING JUMP JUMP I AM THE BEST AT THIS". Seriously. Total 180. We walked out to the jump warm up on a loose rein with no antics and no screaming.

We wandered around warm up.

We watched other horses go by.

I did some walk/trot transitions with him and tried to incorporate the little bit of terrain into my riding plan, but mostly I was in full-on brain panic mode "AHHHH GOING TO DIE DO NOT WANT MORE BROKEN BONES AHHHH GIANT SOLID XRAILS OF DEATH."

I can't explain it. I am terrible at emotions and this was a straight-up gut response to fear of bodily harm. Between the deer leaping last week and my on going XC issues, it wasn't pretty. I trotted and cantered over the baby cross rails in warm up while redheadlins said things like "LEG ON" and "DON'T PULL" and probably muttered a string of well-deserved expletives about why the hell she spends so much time helping us if I'm going to show up and not ride, but she's too nice to say those things out loud.

Anyways. It was finally our turn to go. The first jump was going down a slightly inclined plane. Not even a hill. I'd walked the course a couple times with Alyssa and we'd talked about how we needed to ride positively, blah blah blah.

I'd like to say I'm writing a book called "Pulling Your Way to Success: The Way Ammies and Green Horses Don't Get Around XC", but the truth is I just had total brain freeze, took my leg off completely and pulled all the way to the fence.

We circled around and hopped over it. He landed cantering, so I pulled some more, though I did manage to kick just in time to get him over #2.

Because this was going so well.

We walked our terrain change (crossing a road) and said hello to our fans, but I never really got him in front of my leg. Not at all. Not even a little bit.


We made it over the next jump or two, but then we had to turn the corner and head towards a field of cows, which is something we are not the best at yet. He took a hard look at the cows (since SOMEONE was neither steering nor kicking), then decided against the jump.

Oh, and he slipped, which was all "DANGER COURAGE ROBINSON DO NOT ATTEMPT". I presented twice and then was like "screw it, not fighting him over a crossrail and BRAIN PANIC WE WILL SURELY DEER LEAP AND DIIIIIIIIE"


And yeah, I wish I was exaggerating.

So we skipped the jump. We made it over the next one, then the course doubled back on itself. Here's the thing. If you take a smart, older OTTB and tell him that the little black cross rail is dangerous and then don't ever bother to kick and just let him camp behind your leg, you aren't going to "trick" him into jumping the X the other direction on the basis that he doesn't know it's the same jump. He totally does and you are an idiot.

So we skipped it again.

Not my proudest moment. On the other hand, we were (obviously) not in contention to win and we are trying to accrue calm, positive experiences. Maybe next time we'll go for calm, positive and SUCCESSFUL or something crazy.

So anyways. We trot/cantered the rest of the course and he was a total star even though I continued to not kick and usually pull. I don't know why. I can say quite authoritatively that riding backwards isn't incredibly useful, but I think I'd already done that survey before.

So there you go. If in doubt, kick instead of pull. 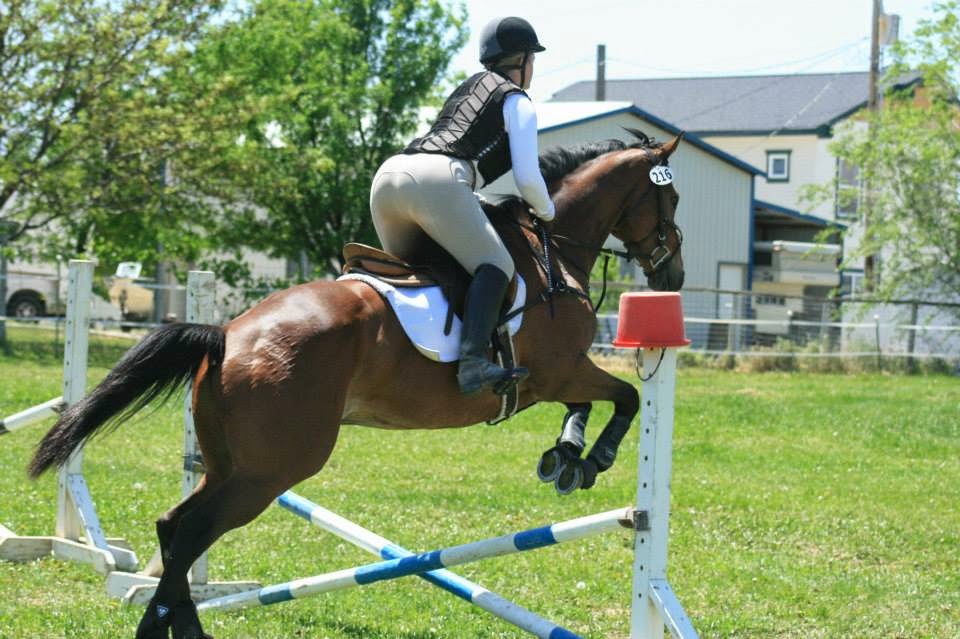 I guess I'm not sure where that leaves me. In hindsight, I probably should have put redheadlins in the tack for the weekend because she would have gotten him around and I could have seen him do it and maybe calmed down. I didn't do that and I can't change it.

I'm really frustrated with myself for my total inability to just get out there and ride like I know I can. Courage showed up and did great. I'm not sure what more I could expect from a green horse who was totally guessing on what he was supposed to do... like if I ride completely opposite of how I do at home, is he then still supposed to do the same thing or change?

It's a fair question. We'll be addressing it this coming weekend. I signed him up for a cross country clinic at the facility and am practicing my kicking skills in the mean time.

PS If you're asking "wtf sprinklerbandit, don't you want to do hunters? If you suck at XC this much, maybe it's time to give it up. Why are you still trying?"

That is a good question.

I don't know.
Posted by SprinklerBandit at 7:00 AM