Sunday marked the last event derby of the year.

Friday and Saturday marked the horse show I was working hard to help organize. Saturday was also the day of an 8.30pm homegame (to which I had tickets) for my local sportsball team and BECAUSE Sunday was derby day, I still had to ride before the show.

And stuff. I'm still sucking down coffee, though I'm pretty sure my veins are just running caffeine right now, but please bear with me if this doesn't make sense.

Courage continued his streak of pretending that he never had a loading problem and we were off to the show! He unloaded great, hung out at the trailer fine, and when I tacked up and headed to warm up, I had my normal, rideable horse and not the fire breathing monster I'd schooled in the dark Saturday morning. (Thank. God.)

I dunno why y'all rave about ride times, because the show was running like 40 minutes late, so I ended up being on C pretty much forever. I probably should have been more disciplined--I started a nice warm up, realized how far behind they were, and then mostly hacked until they were ready for us. I was happy with how I rode and happy with the horse I had. We were doing intro B, so there isn't a change of direction at the trot even. 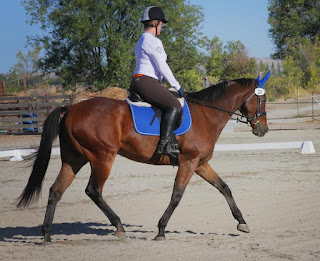 I will say that walk is not Courage's strongest gait, and there is a lot of walking. Anyways. I was happy with my test, not thrilled with my score. Life goes on.

Courage had a nice, long break at the trailer with hay. He did remarkably well. I mean, now he has to be tied on his own side on account of trying to breed Bacon last time he was at a show with her. Oops.

When we got on to head to XC (for the super-competitive ground poles division), I actually felt ok. A little bit like dying, but not bad. Honestly, it's the best I've ever felt about this whole field-jump-thing with Courage, ever. We gave our buddy a lead over to the field and then headed out, first on course.

About a third of a step after our first pole, Courage decided the grass was filled with HORSE-EATING SHARKS and they were HUNGRY and he had NO CHOICE but to SPIN AND RUN FOR HOME.

Grass sharks are the worst, y'all. They're invisible, so you never know where they'll be next.

Unlike our May derby experience, where the sharks attacked and we spun circles until I remembered how to kick and racked up two refusals, I never let Courage turn around. I kept my leg on and my hands forward and we may have trotted sideways, but by golly we were still trotting.

Courage remained extremely suspicious of the far edge of the field (which we had to go by 3 times) and the whole ride was about settling him instead of worrying about high options or being competitive. But hey. We had no jumping faults and I'm really happy with how I rode, considering that just a few months ago, I simply could not do it.

Not gonna lie--I'm pretty proud of us. :-) I sort of doubt we're going to move up or actually event or do anything at all with this. I mean, the xc phobia is real and it makes the whole process not fun for me.

That said. I am really happy with the improvements in my riding and how it translates to my horse. I was able to salvage something that would have completely overwhelmed me in the spring. That is very cool. 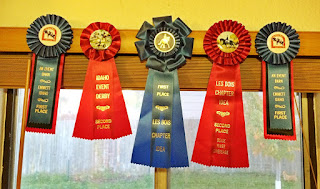 Also very cool? Check out my ribbon collection from this year.

Blue and red, baby. (My inner realist must point out that there were never more than two in any derby division that we did, but the dressage ribbons are legit.) 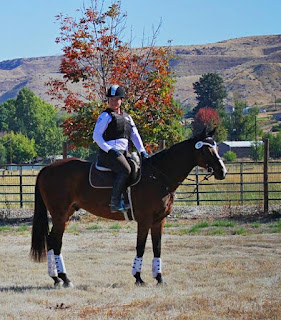 (where sideways trotting is encouraged instead of heavily penalized)

Posted by SprinklerBandit at 7:58 AM