Fantastic or Insane (both?) 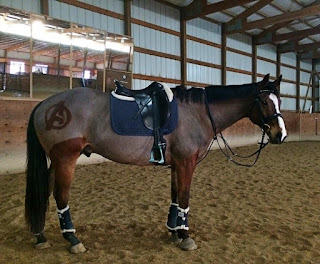 "Either he's fantastic or I can't get on," is how I describe our current riding status.

Lessons are weird for me--I used to LOVE them, because I learn things and get better and that is awesome. But on Courage, they have a distinct tendency to look like this: 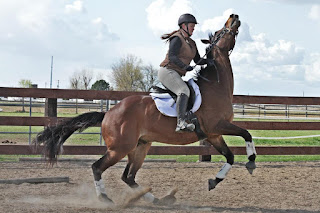 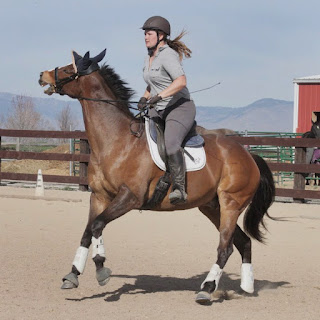 And that is really no fun at all.

So when my trainer pointed out that I was, in fact, "on", I sucked it up and decided to keep riding until I actually thought he was going to take off flailing before asking her to ride instead. I mean, realistically, I do have to ride the horse myself to get my scores and while trainer rides are great, I'm the one that needs to learn first level, not her.

And the weirdest thing happened.

Which means I got my ass handed to me.
You see, when every.single.lesson. for the past several months has been "how not to die in these unusual circumstances while your horse turns himself inside out", the nuances of riding are out the window and it's more like "don't kick... don't pull... hang on... deep breath... AHHHHH SAVE YOURSELVES". And while I am turning in to something of a specialist at riding a sensitive horse through very challenging situations (or at least, my trainer is, HA), I haven't had a lesson about me in ages.

So when Courage slapped his game face on, I was officially screwed.

Here's a thing about me: I don't like taking a contact. I grew up riding a horse that would never, ever take an honest contact no matter what, so we faked it. It wasn't until attempting dressage on Cuna that I learned how to actually take a contact and ride into it. But Cuna was a long time ago at this point and most of my lessons on Courage are focused on like "DEAR GOD WHY" instead of minutiae, it's easy to lose some important skills.
Pretty much I could have this whole lesson again if I just played a tape of my instructor saying "CLOSE YOUR FINGERS" and then "OPEN YOUR ELBOWS" over and over like 500 times. In pursuit of unsupervised softness, I have decided to lock my elbows open with my fingers open and then bounce my hands up and down every time I post.

Now when I do close my fingers (providing Courage a solid place to go instead of letting his energy dribble out the front) and use my elbows correctly (providing a soft contact instead of a trampoline effect on his mouth), he is LOVELY.
Getting there is the HARDEST. Grrr. I literally have to think OPEN ELBOWS every time I post up, which means I'm not thinking about closed fingers, which means my trainer basically has to yell one thing or the other at me CONSTANTLY.

It's hard, but I love it. I can really feel the difference in Courage when I get things right. On the days on which I can get on, he can now be super fun to ride. 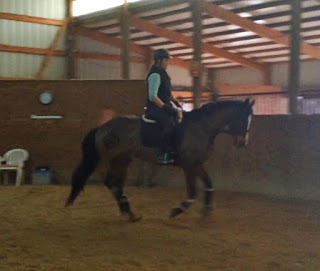 We even had a right lead canter!! Omg. We've been playing with this a few times this "spring" (it's not quite spring yet), and I've never asked him for a whole circle of the right lead. We did A LOT of circles (at least 3?) in the lesson, and Courage never tried to leave. Kept his brain working and let me be a hot mess on his back.

You doubt? I HAVE VIDEO.


(we looked a little better to the left, but there was a slight muck up with the video, so you'll just have to trust me)

I watch the video and I see lots to work on. And I say that because I feel like a dumbass even posting it after I'm like "oh yeah totes want to ride GP someday" and then it's like "haha yeah watch me fail I'm so good at this".

So yeah. We aren't polished and perfect. But you know what? My horse kept his brain on for a whole lesson, and that is a New and Awesome skill.