I've had Courage around 2.5 years now.

It has been a bit of a rocky road. I mean, I got him the end of July in 2013. He went to a show and did ground poles that fall, but that was it.

Then 2014, we did one show. And it was... ummmmm yeah I'll go with horrible. And then we didn't even bother to try again.

2015 saw a lot of show miles and our oh-so-memorable championship of ground poles.

I'll be real with you: there are parts of me that are not proud of winning the ground poles. We all know Courage can jump like this:
And dressage like this:
And it's so, so easy to get down on myself for only having Courage as far along as I do. I always blame myself. I feel like if he just had a better rider, he'd be running Novice eventing by now or show jumping respectably or really, anything other than almost-first-level dressage and sketchy-ass ground poles.

It's not that I think he wants or needs to be farther along--obviously, he's a horse and he doesn't even know that "farther along" exists, much less that it's something he should want. It's that as a high-achieving adult ammy horse person, I feel inadequate. I feel like we scrape by doing the bare minimum and that most of our hold ups are my confidence issues and not him at all.

And yeah, that's hard. Those things are real. The amount of courage (ha!) that it took for me to get around an XC course, even at poles on the ground, was staggering. I can talk all day about the tactful ride that Courage requires, but the truth is, I don't want to kick him in the belly either because I don't want to get hurt. Not now. Not on this horse.
But then Alyssa ran across some old videos the other day and sent them to me. After our one really horrible show in 2014, I sent Courage to an xc schooling with Lindsey in the tack. I thought I was the problem. I thought I was screwing up my horse, and I knew Lindsey didn't have the emotional baggage with him that I did.

I've told the story a hundred times--Courage was so naughty that the trainer (pro who's gone advanced on multiple horses) had Lindsey get off and he got on. And then 15 minutes of the "group lesson" was the pro getting Courage to go through ground poles. And even after that, we ended up just getting off and lunging Courage because he Could.Not. that day and that was it.

But no matter how many times I've told the story, nothing quite compared with seeing the thing again. Here's part one:

Part Two, Three, and Four if you're deeply interested.

It was so therapeutic to watch those videos for me. I'd forgotten what it looked like. I mean, if you go through the videos, you can watch the trainer try several different approaches. He gets after C for leaping and pissing off, but that makes it worse. Then he tries pushing him forward when he runs off, and that makes it worse. He tries changing the topic with lots of little circles, and that sort of helps but sort of results in C trying to shut down.

And he ends by walking through the poles because that is all Courage could handle at that time.

It's just that Courage needs things explained to him at his speed. If you try to force things any other way, it gets ugly. You can watch him pop the trainer out of the tack, time after time. Courage isn't bucking or rearing (really) or doing anything "horrible", but he's putting the rider wherever he wants him because he CANNOT take the pressure.
It wasn't pretty. Looking back, I feel kinda bad for the guy riding. Sorry dude. Not your fault. At the time, I thought Courage would just get over it. I thought if we kept trying, if we did SOMETHING, that it would get better.

I felt the pressure of all those magical "3 months from track to BN" success stories. I wanted Courage to be brilliant and high achieving. I wanted everyone to see how special he was, the same way I did.

So yeah. In 2015, my horse and I were the champions of ground poles. In 2014, even a pro couldn't get him through ground poles without completely losing his shit. Maybe ground poles don't matter to you and you're going to make mean, snitty comments to me about how I'm less of a rider (I will delete those comments and leave my snide replies. You have been warned.)
But maybe I don't care. Maybe I'm enjoying my horse at my speed and maybe the fact that he NAILED his leg yields last week was good enough for me.

Scratch that. Not maybe. It is.

Courage and I have made incredible progress together. Our first dressage test together looked like this:


I don't have recent video of a test, but last time I got riding video, it looked more like this:


Just because our progress doesn't look like your progress or a professional's progress or whatever, it's enough for me. Courage and I aren't going advanced or grand prix and we don't want to. I want him to be a fun horse for me to ride and chase my goals on, whether those goals are a bronze medal, a fun jump course, or going to a goofy trail competition (or all of those).

So yeah. My horse is sensitive, complicated, and (barely) proficient at ground poles. He's also a boatload of fun, a challenge every day, and damn good looking in all the outfits I put on him.
2016 will be our third/fourth year showing together and I have absolutely no idea how it's going to go. We probably won't be the champions of anything. We probably won't blow anyone's mind. I'm hoping we make a respectable showing at first level. I'm doubtful that we can also make a run at the crossrails derbies. 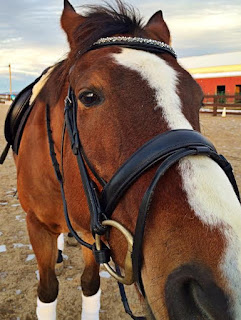 But whatever happens, this is the face I see every day and that makes it all worthwhile.
Posted by SprinklerBandit at 9:23 AM