We all know I'll spend money on Courage without so much as the drop of a hat. Tack, blankets, bodywork, random herbal shit when I'm hormonal, basically anything I think might make his life 0.1% better, he gets.

He gets bodywork a lot. His bodywork lady always says 24 hours off, which I meticulously count off. If he gets worked on 3pm Saturday, I'm in the saddle 3.15pm Sunday. Plus I always call him a persnickety pain pussy because he's so reactive about the process that clearly makes him feel better. C'mon dumbass. Show a little gratitude, amiright?

At this point, I should possibly mention that never in my life have I had any form of massage, chiropractic adjustment, or physical therapy. Other than a myofascial release class through pilates here and there, I haven't bothered to spend that money on me.

But in the aftermath of the car accident, I finally did get a massage because I hurt so much.

Ummmmm yeah have any of you ever had one?

DEAR GOD THEY HURT SO MUCH.

And then not only do they hurt in the moment, they hurt hella more later.

From here on out when poor C gets bodywork, he's also getting AT LEAST a full day off (maybe a week) and an entire bowl of bute. 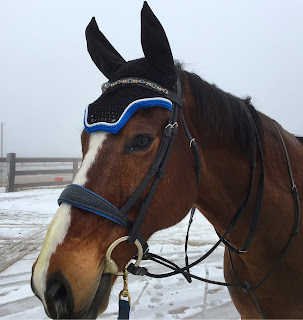 THE POOR HORSE OMG.
Posted by SprinklerBandit at 7:00 AM