"If You Have Good Instincts, Trust Them"

"How I Got My Horse Back"

I haven't said a whole lot about it on here I don't think and you may or may not have picked it up from social media, but Courage has been Terrible. Yes capitialized. I'd go all caps too, but y'all might just think I was being dramatic when it's him.

Regardless. Despite everything about his life being tailored to suit him, Courage lately is the worst Courage has ever been and I'm including times like when he reared and knocked Lindsey down and got loose at a trail head or any and all of his show disasters or even the dramatic bolting y'all are getting a little too used to.

I mean. I had a lesson last Tuesday that Alyssa came out to document. Last time she came out, he was so naughty that my trainer told me to get off and lunge "lest ye die". Maybe not quite her words. Anyways, this time was sort of better--I lunged first and C was a ball of anxiety but not bolt-y or naughty.

Well. Not until I got on, at which point trotting in a straight line prompted a flail into the fence. We finished with some walking, but he was getting more and more amped and tense and nothing we could do would get through to him.
I canceled his trainer ride for later in the week because there was no goddamn point. I was getting lots of recommendations from lots of people for draw reins and cowboys and "just kick him through it", but look. I'm an ammy. I like being an ammy. I'm not interested in riding through that sort of bullshit and frankly, even if I can (maybe), I know it will pile on so much baggage that I'll have an even harder time being calm and straightforward with him.

And while cowboys are DEFINITELY on the table, I also know that once I go down that path, I can't undo it and Courage is really, really sensitive and yeah... I just don't want to cause more problems than I would solve. And frankly, I'm a little bit appalled how many educated, progressive-type people are inclined to say "just rough him up a little" in regards to a problem I'm having trouble solving. I guess yay living in the west?

Anyways. It was completely terrible.

His magical bodywork lady came out and brought his beloved magnawave thingy. Long story short, it took her multiple sessions with the magnawave to even let her tough him, but when she got to the bottom of it, he had a pinched nerve in the base of his neck that was excruciatingly painful. She's pretty sure he's ok now, but said he might need another session depending. 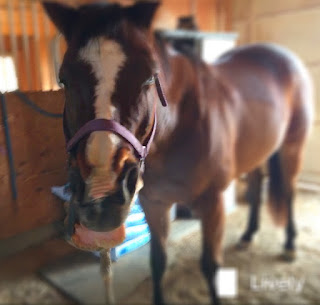 And see, I like patterns. I like things to make sense. I'm willing to accept a hearty dose of "that's horses" most of the time, but I like to have an inciting incident. The little piece of information that makes it all make fit together.

I have a pretty good read on Courage most of the time. I know that while he's an asshole, he also likes me and generally goes well for me. I think he's quite good at dressage and he likes this barn and this trainer and it's weird that it all went to shit. Super weird.

My trainer has pointed out more than once that this all started after our little open show. He was fine, and then he wasn't. Lots of people have tried to tell me it was the atmosphere or the arena or that it was too much too soon or the other horses scared him, but here's the thing. He gave no shits about the atmosphere or the arena. He was FINE with the other horses. I honestly think he liked them. Remember, he freaking WON his first class out there.

And then it got terrible fast.
I remember that show so well--the w/t class was FABULOUS. I had every expectation of the next class being the same way, but I remember coming towards the corners of the arena by the mirror and the announcer calling for a canter. I asked for it, and Courage bolted SO HARD and out of nowhere. I wasn't tense or mad or expecting it and there was zero warning. Which is weird. My drama queen loves to bluster and make threats.

And see, the day before the show, I had one of my best rides ever on him. My friend from out of town was visiting and Courage was freaking perfect. Except. I mean, I thought it was weird on the lunge line because he didn't really want to move forward and held himself in this little frame.
But it was hard to be mad because he took a contact and looked kickass.

Admittedly, the day before that, I'd tried to school for the show and I had to get off because his canter was solid dolphin leaping and I couldn't get him to level out.
But he'd looked ok on the lunge?

And if you scroll further back, earlier in the week, he looked like this and I was SO PROUD of him and so excited for us.:
I remember riding in this lesson and being SO THRILLED that he was so rideable and I was actually getting to work on me instead of him.

So clearly he was fine then. But what changed? What made him go from brilliant to dolphin leaping canter, then brilliant, then horrific and then spiraling downward?

That's when I remembered.

The farrier. See, good horsemanship tells us that wisdom is to pull shoes and let horses be horses for a while in the winter. My last farrier and I tried that with Courage a couple times and found out 100% that is a TERRIBLE idea for him. His feet fall apart, he gets crippled, he doesn't get better. The horse needs shoes. So the farrier and I made a pact to NEVER do that again.

But then that farrier moved away and I got a new farrier who's great, but who doesn't have the history with C. So when I get all woo woo hippie status on him and go "maybe we should pull his hind shoes for a cycle", he said "sure" instead of straight up bitch slapping me and screaming WTF NO ARE YOU TRYING TO DIE.

So we pulled his hind shoes. Then I tried to ride him and while he was sound, he was short strided at the walk and trot, and was only capable of dolphin leaping at the canter. I rode the next day and he was good, but unwilling to push forward off his hind end. Think holding his body in a frame to compensate for ouchy feet. But good, so I didn't overthink it.

Then he was ok at the show until I asked him to lift his withers and canter, and I think by then the damage was done. He tried to do it, but he'd pinched the nerve by compensating for his feet. He was as surprised as I was and we bolted sideways. Repeatedly.

Back at home, Trainer said he felt ouchy and stiff, but she couldn't pin it on a specific leg, so she did a course of bute. I had a family emergency and wasn't really at the barn for a couple weeks. 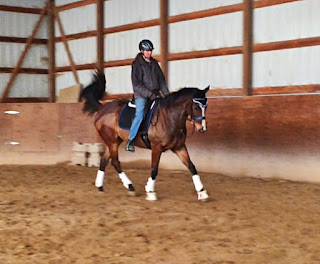 Once I was back, we started asking him to work harder and Courage got worse quickly. I thought he was naughty.

And the whole time, he was screaming at me that he hurt.

A barn friend kept pointing out that when C is unrideable, it's usually pain and I kept telling her "but it's never presented like this before", which it hadn't. Usually he quits turning right, not just freaks out and blows forward.

But you know. Never before have I pulled only his hind shoes and so the pain was different this time. 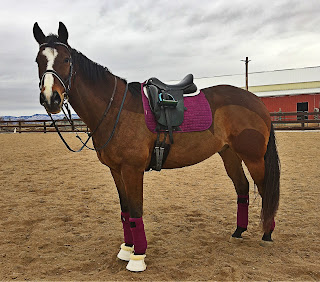 The things I learn from him aren't always fun, but the skills he's teaching me apply so many other places. Things like learning to trust my instincts even when everyone tells me differently or taking the long view when the present is crappy. Standing up for myself and my belief even when it's hard.

And always obsessively documenting everything so you can look back at it later and see the larger patterns. 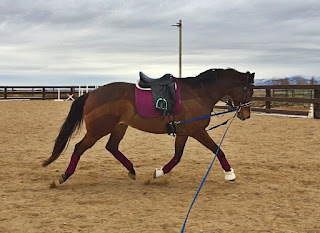 Oh, and great outfits make everything better.
Posted by SprinklerBandit at 8:15 AM