This post goes out to the like... two of you who aren't bored out of your skull by lunging and training. But my world is solid ice with 10" of snow on the way and I still can't ride and I want to think about something I don't hate.

I'd be lying through my teeth if I said I was happy that I haven't sat on my horse since November, but our winter of SB crippling out to the barn and putting Courage on a lunge line is having some interesting side effects. See, Courage has a super shitty canter.
Well. That's not really true. He canters in ONE WAY. He tenses his underline and PLUNGES into canter and moves his body via momentum instead of strength. To me, that's why he can jump beautifully but everything goes to shit in between the fences--his technique is superb, but if he gets an off distance, he doesn't have the physical ability to change his canter to fix it and panics. I cannot say whether the canter is genetic thing or racing thing or a brain thing or what. I can just say that is what I have.

The past few weeks in the Vienna reins have been utterly fascinating for me. Courage is now trotting regularly like this:
I'm not scrubbing the whole video for the perfect screen shot. I'm pulling a ton of screen shots and going "omg how do I choose". To me, this shot shows a moment of suspension allowed by Courage swinging through his whole body. I see withers lifted, topline engaged. I'd like to see more from behind, but this is new for us and that's where he's at. He walks like a panther, his w/t/w transitions are gorgeous, and everything is peachy. 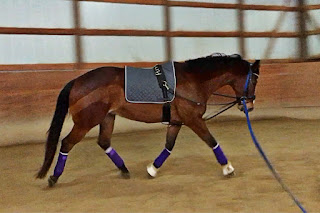 The vienna reins aren't magic--they just set some parameters and allow him to find his balance within a certain range. I keep them adjusted pretty long because I don't want him to feel trapped, though not too long, because they don't need to flap uselessly. Plus, I'm not here for a headset. It's critical that I focus on Courage keeping his hind end moving so he's tracking up (at least) at both walk and trot. That is what mechanically asks him to move his back and use his body. If I let him get "behind the leg" as it were, he'd just be stuck in a pose and dumped on the forehand with his back jammed up.

But what about the canter?

This is what is the most interesting for me. Canter is and always has been a hot button issue for us. The transitions are bad and the canter itself isn't better. Under saddle, the standing martingale has limited the leaping and bolting, but not stopped it and we haven't been able to change it.

We can only address one issue at a time, because reality. However, this is a serious chicken/egg issue--you can't really canter well out of a bad transition, but you also can't really get a good transition to a bad gait. So.

The past few weeks, I've intentionally set Courage up for the best transition possible t/c, then just taken what he's given me and worked the canter itself. That brings us shots like this:
Again, this was very intentional. I needed Courage to find a good canter that was balanced and comfortable. I had to play with this A LOT to get there.

I'd assumed that because his balance was not good and claustrophobia is his go-to, that we'd do big circles and go freely forward, but no. What I found was that if I kept Courage on a 10-15 meter circle and VERY engaged, I could get a few strides of the canter in the picture above. As soon as I got those strides, I'd ask for a downward transition or if he lost his balance, just let him drop to trot and reorganize. This actually makes sense--I'm asking him to change his whole way of going and to do that, I need to make a difference every stride, not just let him cruise around.
It took a while, but Courage was starting to get where he actually had a semi-decent canter. He couldn't hold it long and his upwards transitions were not good, but he was starting to have consistent, good downward transitions and was able to make a couple 10-15 meter correct canter circles.

But transitions are important.

And again, doing the same thing wasn't working. No matter how well I set him up, the best transition I could get was this:
We got it down to one or two strides of blast off and way-less-blasty-blast off, but even with the small circles and extra transitions and good canter, we weren't breaking through to the next level. The only way Courage understood to get to the canter was to drop his withers, invert, and lunge.

The vienna reins do set parameters, but I didn't want to crank them in and force a headset to get my point across. Besides, if there's something Courage is the best at, it's bracing on the least resistance possible. So. Crank him in, create a new fun version of this problem. Whee!

So we tried another different approach.

I hooked Courage up in the vienna reins like usual, but instead of my normal "walk til he's soft and reaching, w/t/w transitions on a small circle until he's soft in the body, gradually move him out to a bigger circle and ask for more trot etc etc etc", I immediately put him on a small 5-8m circle and asked him to reach for the contact from the lunge line.

IE, instead of maintaining a position through his own good graces, I wanted him to actively seek what I was offering. I didn't care what gait and we definitely had some frenetic "omg wtf you crazy human i must leave" moments, but every time he backed off, I asked for more. Every time he hollowed, I made his circle smaller, and when he took an honest contact and went forward, we gradually moved onto a bigger circle.

As he began to understand the question, I started asking for actual gaits. Same as with his downwards though, I let him give me what he had and there was zero pressure or punishment if it wasn't quite right--we'd just do it again. Think ask for canter transition, but as long as he thinks about trying, don't ask again or push or punish. Just keep going, because Courage is enough of an overachiever at this point that I absolutely respect his try and don't want to frazzle him.

Our first videoed transition looks like this:
Yeah it's not great, but what I see is lifted withers and an honest attempt to step up, if somewhat mediocre execution. But instead of star gazing, he's a little bit thinking about the contact.

And then I had this canter:

And he even offered me this moment:
It was half a stride, not a circle, but Courage offered a stretch in the canter of his own accord, which means he felt balanced and comfortable enough to experiment with his frame. I'll take it.

We kept working the transitions and by the end, I had this:
I don't see this frame and think "omg pirouette canter", but I don't care. What I see is a horse that's giving me his best shot right now. Instead of launching his front end and leaving his ass behind, Courage is stepping up into the canter, he broke at the poll, and he's thinking very hard about using his topline. I mean. Look. That underneck is almost slack. Yeah, I'd like to see him lift his withers and be a little more uphill, but that will come.

It's a long, slow, tedious process, no two ways about it. I am absolutely fascinated by figuring out ways to break this down for him and I love watching it start to come together.

Now someday, I need to be able to actually get on the damn horse and see if any of this pans out under saddle.
C'mon SB's body. Get it together.
Posted by SprinklerBandit at 11:00 AM