Due to exciting and ongoing complications of having my tiny car smashed by a giant truck whilst I was driving it, riding is still out of the question. Or at least, when I put it in the question, Alyssa and Lindsey rain down hell until I remember I'm brain damaged and probably should listen to them.

However, Courage needs to go back to work. He's had over a month off. I do want to ride again EVENTUALLY and I need to get him thinking and working so my trainer can start back with him. Thus, when a friend recommended vienna reins to me, I told her they were a terrible idea because of how claustrophobic C and and promptly bought a set. #tackho 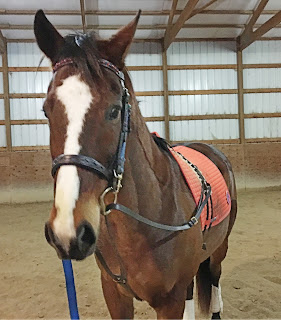 If you're not familiar with Vienna reins, they're a lunging aid. One strap clips to the center of the girth between the forelegs and runs up towards the bit. Then the strap forks. I run one strap through either ring of the snaffle (inside to outside) and clip it back to the surcingle. This would work well in a saddle also, but given I was afraid someone would lose his shit and die, I'd rather trash the $10 garage sale surcingle than the $$$$ Custom saddle. 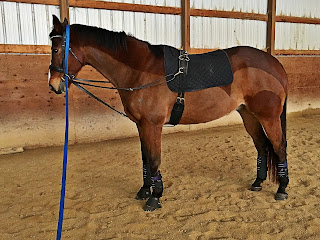 The effect of the Vienna reins on the horse is pretty simple. The horse can move it's head and neck around within the range of the reins. The horse works the reins themselves--if they push up, the reins pull down (sort of), but the moment the horse gives, the reins do too. It's bloody brilliant, frankly.

If you've looked at my many (many many) lunging pictures from the past year, you probably noticed that I had been running the lunging line through the inside bit ring back to the girth with one fixed outside side rein. This arrangement was preferable to two fixed reins, which Courage will just invert and brace against, but when he kicked it in to flight mode, it still gave him something to really brace on and blast away.
The beauty of the vienna reins is that nothing is fixed--Courage can't hit "that point" and really lock his body against them AND when he tries to fling his head and take off (like... always), he gets that steady downward pressure that instantly releases when he lowers his head.

What's more, my main question mark with these was that since there is no way to fully "release" them if he panicked, would they kick his claustrophobia into overdrive and do more harm than good?


Answer: apparently not. I introduced these pretty gradually--just hand walking and w/t the first day, then a few days off, then w/t and sneak in half a canter the second, then actual work and trot poles (!!) the third.

Courage the claustrophobic princess hasn't protested once. Not even a little.  He figured them out quickly and seems completely fine with them. Last time we worked in them, he had some distractions and acted up a big, but since there is nothing for him to brace on, the freak out/flail response was markedly less dramatic.

I think my favorite thing about this setup is that it acts on both sides of the horse evenly. With the other lunging set up we used, Courage tended to track unevenly behind and be VERY crooked to the right. The Vienna reins are the same on both sides, so Courage is tracking up evenly both directions and I have a few more options to try and keep him straight to the right.

I never think lunging is an ideal way to spend time, but it's what we have right now. I'm very pleased with the work Courage is putting in. Instead of fighting the flail, I'm experimenting with exercises to encourage him to push from behind, lift his withers, and reach forward to the bit. Omg! Sort of like dressage! 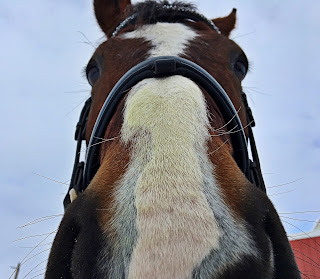 Eventually, I'll be back in that (very expensive) saddle of mine, but until that day, I'm glad I've found a way to get Courage working again.

PS link to video if you're very, very bored.
Posted by SprinklerBandit at 9:04 AM