It Went Shopping, Part the Second

As y'all are aware, Courage is a dressage horse. As you are probably also aware, I wish he would jump. I mean, the horse jumps likes this: 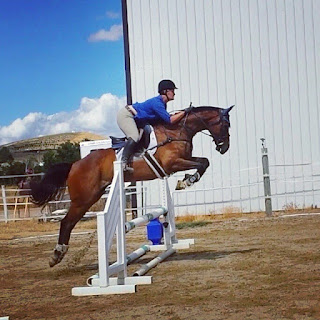 But for complicated biomechanical reasons we aren't going to get in to right now, he is better off not jumping regularly with me. The point is, I have a jump saddle. The saddle really doesn't fit me great and it really doesn't fit him that well.

So while I'm out wandering the internet and buying anything in plain sight, I stumbled across a certain French Gentleman. 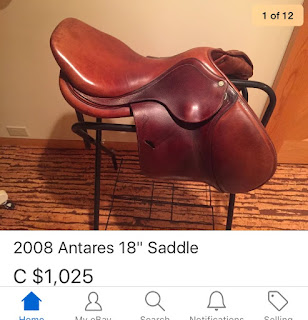 In case you weren't aware, Canadian dollars are basically monopoly money, so omg super cheap!! And yes, of course I know both Courage and my specs in the various French saddles. It's just part of being a tack ho.

Anyways. I went all crazy-go-nuts and bid on the French Gentleman and then drove Teresa and Leah nuts counting down the hours on the auction (quote: "you're giving me a saddle ulcer."). Those of you penny pinchers out there ought to be proud of how I didn't just completely freak out when I got outbid in the final minutes and let the Frenchman go to someone else.
But here's the thing: just because I missed out on on wildly excellent deal I didn't need doesn't mean I can't look for another. #youmightbeatackho

I tried to be objective about it. I don't need a shiny new Frenchman. I only jump a few times a year. I just want something that fits both of us well enough to be safe and balanced. I don't jump enough to spend a lot.

And I want a monoflap.

So I scoured the entire internet. Sadly, all the monoflap Frenchmen were 3-5k+, which isn't in my price range for a saddle for a discipline I actually do, much less one I dabble in once a quarter.
But then I stumbled across this one saddle: 18" medium tree monoflap saddle. Reasonable asking price. A friend has one and raves about it, but she rides a horse different than mine and I've never sat in it. It's a bit of an off-brand and it's not French, but it's affordable.

Despite what you think, I'm a pretty frugal person. I hemmed and hawed and tire kicked and gave Leah a jump on another saddle ulcer. Oh and I definitely didn't tell Alyssa because she's a bit of a hater on the tack purchases unless they're purple. But I didn't want a purple monoflap.

Finally, I told the seller I'd keep looking. (Translation: try to sell my current saddle so I actually have a budget and can start making sexy eyes at Frenchmen on ebay).

Then she countered with an offer lower than my last offer. And the trial I wanted. And threw in some accessories. So I guess it was less like "countered" and more like "caved".
I paid her. Things got weird.

Funny joke no. They were already weird. But once I paid her, the weird hit new and bizarre levels, including the seller messaging me to demand more money because she'd rather get more than than she told me she'd sell for, which is a fascinating way of doing business to be sure.

Not gonna lie, it was three days of sheer entertainment. The negotiations kept getting crazier. I laughed out loud a lot.

But at the end of day three, I was out $$$ and didn't feel like shelling out more to get a saddle I only half wanted and didn't actually need. So I asked for a refund, and to the seller's credit, she promptly complied.

And that is the story of how I both bought and didn't buy a saddle, but sold a bridle to finance it and thus ended up with a hearty paypal balance and we all know paypal money isn't real money, so I rolled that balance into purchasing...

to be continued...
Posted by SprinklerBandit at 7:00 AM