Courage is a challenge, plain and simple.
There are a lot of things that are consistent with him though. He learns much better from the ground than in the saddle. He needs me to be calm. He's a thinking horse, so if a concept is introduced clearly and then he gets to think about it, he will be better the next time. He will try for me, but the trying frequently looks like tension instead of Valegro (dammit).

He's also a horse who is VERY tight in his back.

So how do I mechanically explain to him from the ground that I need him to give through his entire topline?

I started by putting him on the lunge in his vienna reins on a 5m(ish) circle. I asked him to come forward and give to the bit at the same time in the walk.

For my specific horse and his specific conformation, this means AT LEAST tracking at the walk and trot with his neck actively reaching down and his poll comfortably below his withers. 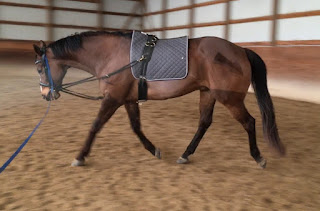 I really like the lunge line for this stuff--horses learn from the release of pressure, and it lets me release the instant he gets something right. I keep him in vienna reins to limit his range of "leaving" responses. We work in the indoor to limit distractions. Our first session was short and just w/t.

Our next session built on the same concepts. Ask him to step up underneath himself on the small circle and stretch down to the bit. The MOMENT he gave me that, I released several feet of line and let him move out to a bigger circle at whatever speed he wanted. Frequently, he'd slow down and think about it vs shooting off.

The picture above shows exactly what I'm trying to achieve--hips lowered, bigger angle in his hind legs than his front, soft through his entire topline. It's just a stride, but this is a weight lifting exercise and he needs time to understand the concept, then more time to get stronger.
But of course, these things are never easy. After two sessions of like HELLZ YEAH I AM THE BEST TRAINER EVAR, Courage regressed. His go-to evasion is to bend out and push his hips in on a circle, which is essentially just leaning in and giving me no options.

He's not being naughty. He just found a response that I couldn't/didn't correct and since that meant there wasn't pressure, it must be right. I mean. It's the path of least resistance.
Fortunately, I've done pretty extensive ground work with him and have a range of tools available. The next time we addressed the problem, I brought my trusty $9 knock-off carrot stick. Then we did an exercise I learned from watching Tik Manyard teach last year--put the top of the stick on the horse's shoulder and ask them to walk a small circle with the stick as a neutral cue.

This is tricky with Courage. I don't lunge him with a whip because to this point, whips haven't added to the conversation in a constructive way. He's sort of okay with the stick, but likes to overreact to new things to see what happens.

But.
After some theatrics (far less than expected, actually), Courage was ON IT. We started in the walk, with the stick passive on his shoulder. I was careful with my body language--my line of direction stayed slightly in front of him and I kept stepping forward, not back to encourage him to go forward.

First, he got a "stop and take a break" full release for walking calmly with the stick on his shoulder.

Next, he got a full stop and break release for putting his head down while walking.

Then it got tricky--he was tentative about the whole stick thing, so he REALLY didn't want to give through his topline, which he has to do to use his back end correctly. I switched to taking pressure off/giving him a slightly bigger circle to reward the release of putting his head down.

It took a while, but he started to give me the same stretch and engagement in the walk that I had been getting the week before, but now less the "throw shoulder in and speed around" response.

Trotting was the next puzzle--I wanted him on a slightly bigger circle but I didn't want to chase him.

However. He's sensitive and the concept was starting to make sense. I was able to put him on more of an 8-10m circle and just point the stick at his shoulder to keep it out. That also transferred well to pointing at his hips to ask him to move them out.

And when we switched to the other side, it was even easier.

That was our entire session for the day. I immediately dropped the stick, pulled the vienna reins, and loosened his girth.


This works for him not because I am a ground work goddess, but because I've slowly built it up, piece by piece. A couple times a month, we take a fun day and do simple ground work in a rope halter. He has clear, consistent boundaries and he understands what I'm asking. I try to only add one new skill at a time. It's never about getting after him or wearing him out--it's a way for us to work together and get on the same page.
Sometimes we do cool stuff like sending him over jumps. Lately, I've been working more on the push him away/pull him back thing to see if maybe it will help his tendency to be hard to catch.

I do like how enthusiastically he participates when he understands what I'm asking. I'm curious to see where this takes us.

And let's be real. I love the challenge.
Posted by SprinklerBandit at 7:00 AM