Wherein SB Spends ALL the Money (not including tack)

It's been slow on the horse front lately. Two weekends ago, Courage was on a field trip and got a (metaphorical) bee up his (figurative) bonnet. He generally ties like a champion, but he pulled back HARD and SEVERAL TIMES. 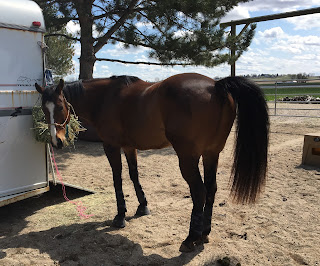 And of course, all that had to be like four days post-bodywork by his usual lady.

I gave him a couple days off, then tried riding again.

We mostly went sideways and in a hurry.
Apparently, trying to rip one's own head off is not recommended for the body sore horse. But also apparently, the week before leaving town is a FANTASTIC time to hemorrhage money straight into your horse.

We did vaccinations and then a few days later, standard spring "teeth and sheath" funsies.
I had a good chat with the vet about Courage's proclivities and maintenance. He was a model patient, even though his teeny tiny dose of sedation made him too drunk to walk back to his stall and we got stuck in the parking lot for a while.
The following day, we had another vet out for bodywork stuff. I say "stuff" in the most technical sense of the word which means that I'm not 100% sure what to call what they do, but it does make a huge difference for Courage. What I can say is his normal lady does more muscle manipulation/therapy and couples it with cool high tech tools. This lady is more focused on spinal type stuff. Hard to say. They compliment each other well and I value having multiple eyes on my #wildmustangdressagestallion and hey, always fun to try new things.
There used to be this super cool older gentleman who came to our area and while he was a vet with a scientific explanation for everything he did, there was this soothing force field around him that horses really responded to and he made huge differences with simple things. This lady trained with him and Courage responded to her similarly to how I used to see horses act with the older guy.

I have never seen Courage be so calm, relaxed, and focused during an adjustment.
She found all the same problems spots that we normally have, plus a few others. We talked about his history, his lifestyle, and the other vet's comments on him. He's been just not... great... in terms of movement lately. I mean, he's not unsound that I can see or feel, but he's not holding adjustments well and he doesn't look as good as I think he should when he's moving freely.

I mean, I was willing to admit it might just be me being hypersensitive, but something isn't quite right. Plus, Courage and I have been doing a lot of simple ground work and not pushing the riding and hard work lately and he's turning back into the horse I remember him being and less of the overreactive lunatic I've seen the past six+ months.

And because Courage is a horse that doesn't mind the hard work as long as it isn't hurting him... that's something to think about.

Before starting on Courage, chiro vet just just checked him out and all the indicators for pain in his front feet and hocks lit up. After working on him, we talked about a plan of action. I was already tossing around hock injections as an idea because high-mileage 12 year old warhorse. She wants to give him a couple weeks to see where we're at. Some of the adjustments she did are things she only has to do 1-2 times on a horse to see a permanent change.

We also discussed doing front feet xrays to see if they will help my farrier out. She's all "might help see angles/some horses do better with non-standard angles so i dunno" and I'm like BITCH PLEASE IM AN AMMY TAKE MY $$$. So yeah those will be scheduled here shortly.

She also said that he's the type of horse who either does AMAZINGLY well with acupuncture or who will have NOTHING to do with it. Imho, the horse gives zero shits about needles and was fine with her connecting acupressure points with her hands, so he'll be great. Also imho acupuncture is hookum, but I'll gladly shell out for hookum to see what it does for my horse. #adultammystrong
(And now that I think about it, proprioception is something Courage and I both struggle with and logically it actually kind of makes sense to stick needles in shit so you feel it moving.)

Annnnnnd that's where we're at. To me, it's worth it to spend the money to look for answers because dammit. I like this horse.
Posted by SprinklerBandit at 8:41 AM